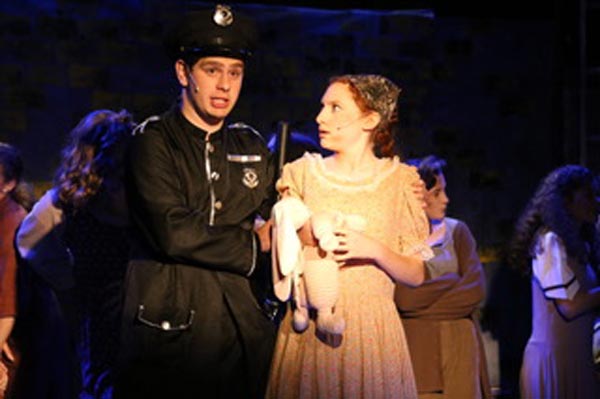 (SUMMIT, NJ) -- Pebble Players opens their season with Urinetown, The Musical with performances across two weekends: November 5-7 and November 12-14. It is a hilarious musical satire of the legal system, capitalism, social irresponsibility, populism, bureaucracy, corporate mismanagement, municipal politics and musical theatre itself! Hilariously funny and touchingly honest, Urinetown provides a fresh perspective on one of America's greatest art forms.

In a Gotham-like city, a terrible water shortage, caused by a 20-year drought, has led to a government-enforced ban on private toilets. The citizens must use public amenities, regulated by a single malevolent company that profits by charging admission for one of humanity's most basic needs. Amid the people, a hero decides that he's had enough and plans a revolution to lead them all to freedom!

Urinetown is an irreverently humorous satire in which no one is safe from scrutiny. Praised for reinvigorating the very notion of what a musical could be, Urinetown catapults the "comedic romp" into the new millennium with its outrageous perspective, wickedly modern wit and sustained ability to produce gales of unbridled laughter. Come watch this hilarious musical that won two Tony Awards for Best Book and Best Original Musical.

Tickets are available for purchase online. Performances take place at The Oakes Center (120 Morris Avenue) in Summit, New Jersey with shows on Friday and Saturdays at 7:30pm and Sundays at 2:00pm.

Based on CDC and state of New Jersey recommendations as well as Broadway League practices, STONY HILL PLAYERS will require all audience members over 12 to show proof of vaccination by card or image of card, OR present a negative COVID-19 PCR test taken within 48 hours of your performance date. Masks will be required at all times inside the building.