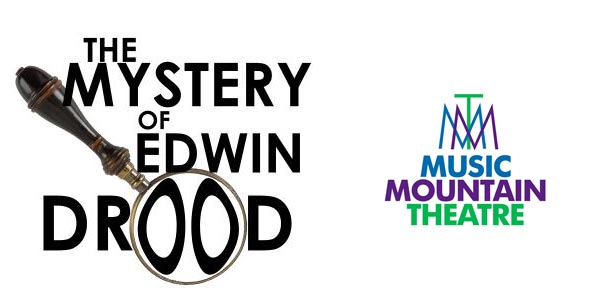 (LAMBERTVILLE, NJ) -- The Mystery of Edwin Drood, a hilarious musical whodunit, opens Friday, October 15 at Music Mountain Theatre and will run through October 31st. This warm-hearted theatrical experience is presented as a show-within-a-show when the delightfully looney Victorian theatre company at the Music Hall Royale “puts on” its exuberant production of an unfinished Dickens mystery.  (Dickens began writing the Mystery of Edwin Drood in 1870 but died the same year).

The story deals with John Jasper (Louis Palena), a Jekyll-and-Hyde choirmaster who is in love with his music student, Miss Rosa Bud (Jen Gursky) but Miss Bud is engaged to Jasper’s nephew, the young Edwin Drood(Alison McMullen). Edwin Drood mysteriously disappears on a stormy Christmas Eve-but has Edwin Drood been murdered? And if so, then whodunnit?

Each show’s audience will vote at their performance to determine the ending of Charles Dickens’ final, unfinished novel.

Show times are Fridays and Saturdays at 8:00pm, Saturdays and Sundays at 3:00pm.  Please note that there will not be a performance on October 29th.

The Theatre strives to provide a safe environment for all with rigorous cleaning procedures and more recently, the installation of state-of-the-art air scrubbers to increase indoor air quality and reduce contaminants. In an abundance of caution & based on CDC recommendations as well as a desire to protect the health and welfare of all, face masks will be required for audience members.  For more information on the theatre’s safety protocols or to purchase a ticket, visit their website or call (609) 397-3337.