We will never forget the way COVID-19 has changed our daily lives and those around the world. Well into the second year of the pandemic, the virus is now finding its way into movies. One film that has incorporated covid into the plot of a wonderful psychological thriller is Into Schrodinger's Box, which screens at the New Jersey Film Festival (in-person and online) on Friday, September 17th at 7:00pm.

The film begins with Sophia, a talented concert pianist, returning home after a performance was cancelled. She finds her husband (a film director) on the bedroom floor, coughing and struggling to breathe. She immediately calls 911. The medics tell her it is likely covid and that she needs to quarantine herself for two weeks.  They swab her for a covid test.

Her husband is taken to the hospital and Sophia begins meticulously cleaning the house. Watching her scrub everything down and replace the sheets on the bed left me wondering if I could sleep on that bed during this time. The film does an excellent job of showing how we adapt to such circumstances and asks: what if our fears take over?

Things begin to spiral quickly for Sophia. Her stepson calls and says she must have gotten him sick. Even worse he says she will be blamed if he dies. Sophia later wakes up with a record playing and believes someone is in the house. Sophia calls the police who come and do not see anyone. They think she imagined the intruder and set her up with a social worker. "Have you ever been afraid of being alone?" the social worker asks her during a video call.

Her husband is now on a ventilator, fighting for his life.  She talks to him and asks him about the email from their son blaming her.  And then Sophia begins coughing during a band rehearsal over ZOOM. She fears she has covid too. But every time she calls for her test results she is told they aren't ready yet.

Then comes a major twist - Sophia is sure she noticed someone moving in the house. It turns out to be a woman who Sophia knocks out and locks in the bathroom. She calls 911, but they now have her flagged after the earlier false report.  When the woman, Lilith, wakes up, she tells Sophia that she is an actress who is working with her husband. The woman is soon revealed to be having a rather long affair with Sophia's husband.

Lilith wants to leave, but is worried that she may have caught covid from Sophia.  She says she needs to be quarantined with her. Sophia soon receives word that her husband died in the hospital.  Due to covid, they aren't able to have a standard funeral. Days later her husband's cremated ashes are shipped to the house.  The two have a wake for him and spread his ashes in a fire pit in the backyard.

"Maybe deep down you wanted this," said Lilith.

"Martin was a defeated man," replied Sophia.  "No one was investing in his films.  He thought the world was plotting against him." 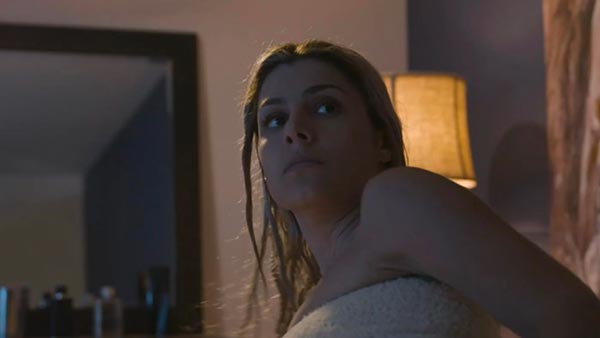 And then things really get crazy.

Sophia is caught in a whirlwind situation where she is accused of essentially killing her husband, her stepson tells her that the house and all of their assets were moved to the stepson's control.  And her stepson and his mother will be suing her.

But you'll have to see the film to catch the true twists and turns that honestly I never expected.  The film by directors Nasim Naghavi and Amir Ganjavie is well acted, captivating, and constantly offers surprises.  Click here for an interview with the directors.

You can see the film in the Rutgers movie theater or watch at home on Friday, September 17 at 7:00pm in Voorhees Hall #105 (Rutgers University, 71 Hamilton Street, New Brunswick, New Jersey) and all day via Video On Demand. A purchased ticket gives you access to both these screenings. Tickets are available for purchase here.