It’s a gorgeous summer evening just outside the Great Auditorium in Ocean Grove, NJ, this Thursday, July 15, 2021. A cool breeze blows off the sea as people walk their dogs, families enjoy ice cream cones, and kids ride bikes and skateboards in the park on Pilgrim Pathway. In addition, music lovers are making their way inside the Great Auditorium to hear tonight’s latest 2021 Summer Stars Classical music series offering starring The Vieness Piano Duo.

The Vieness Piano Duo was founded in 2017 in Los Angeles at the University of Southern California. Comprised of husband and wife musicians, Vijay Venkatesh and Eva Schaumkell, the duo has performed all over the world in such varied settings as the Dorothy Chandler Pavilion in Los Angeles and at the Kultur unter’m Dach music series in Meersburg, Germany. 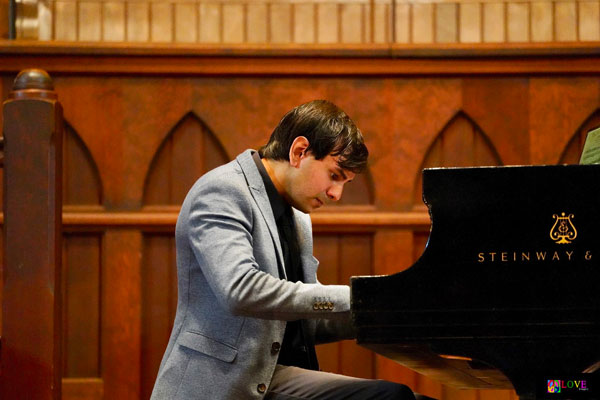 A versatile pianist, Vijay Venkatesh has performed extensively across the United States and Europe as a soloist with symphony orchestras in Seattle, Vienna, UC Irvine, and the Brevard Music Center in North Carolina. He has also performed at Merkin Hall in New York, Chicago’s Dame Myra Hess series, and at the Aspen, Banff, Newport, Redlands Bowl, Sarasota, and Vienna Music Festivals. 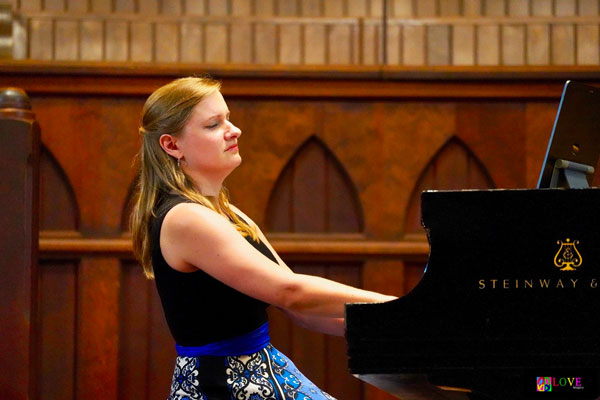 Eva Schaumkell’s solo piano career has led to dozens of concerts throughout the US, Europe, and the Middle East. She’s performed at Walt Disney Concert Hall in Los Angeles, Steinway Hall in London, and Buckingham Palace. Recent highlights include appearances at the International Summer Academy of Music in Germany, in addition to performances with the London Spring Sinfonia and with the Cairo Symphony Orchestra at the Cairo Opera House in Egypt.

Inside the historic Great Auditorium, the stage is set with two Steinway Grand Pianos with rims connecting so that they appear to look like one massive instrument. Two piano benches face one another. As patrons enter the facility, several study the stage and select seats with an optimal view of either one or the other Steinway keyboard.

Before the show begins, we take a moment to chat with two audience members, Elena from New Egypt and Kathy from Ocean. Says Elena, “We’re here to hear fantastic music! I saw The Vieness Duo when they were here two years ago and they were very good.” A pianist herself, Elena acknowledges, “It was hard not seeing any live concerts last year, but we’ve already seen three concerts here at the Great Auditorium this season!”

Adds Kathy, also a pianist, “We were here last Thursday for The Solisti Ensemble — they were fantastic — and we’re really looking forward to tonight’s show,” explaining, “We’re sitting in the front row tonight because we want to be able see their hands!”

We also chat with John from Yardley, PA, who declares, “We missed concerts so much last year! We attended a choir concert here at the Great Auditorium last Sunday with over 300 singers. The place was packed!”

Explaining, “My wife and I are both musicians” — joking, “we were in high school orchestra together; she was first violin and I was second fiddle” — John concludes by stating, “We both enjoy classical music and are very much looking forward to hearing the pianists play tonight, especially since my wife plays the piano.”

Gordon Turk, Artistic Director of the Summer Stars 2021 series, introduces tonight’s program, suggesting it will include a variety of composers from different parts of the world. After he welcomes The Vienness Piano Duo, Eva Schaumkell and Vijay Venkatesh enter. Holding hands, they take a bow before proceeding to sit at the facing Steinway Grands. 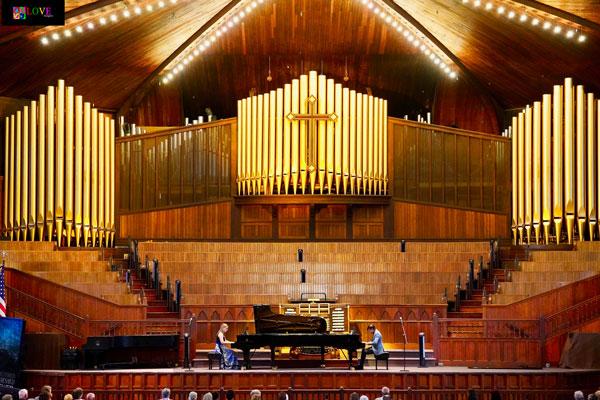 The music commences as powerful chords accompany the familiar melody of the “Overture” from Rossini’s Barber of Seville. Venkatesh and Schaumkell watch one another as they slow down together to play “rubato” before quickening up again. Audience members see, hear, and feel the connection between these two talented performers. They are in sync musically to the point where the two pianos sound as a single unit whether they play “pianissimo” or “fortissimo.”

Greeted by applause and shouts of “Bravo!” Schaumkell thanks the audience, acknowledging that tonight’s performance is the Duo’s first two-person piano concert in over a year. Exclaiming, “We’re so happy to return to this beautiful auditorium!” Schaumkell prefaces the group’s next piece — Hungarian Dances by Brahms — by pointing out that its five movements are based on “Hungarian folk tunes which Brahms heard out on the streets.”

After opening with “Dance No. 1 in G minor,” a bright and rhythmic movement with lovely tinkling runs, the duo follows up with “Dance No. 2 in D minor,” the mood more mysterious yet calming, where the two pianos run alongside one another before ending with a flourish. “Dance No. 3 in F major” is a jolly movement with precise quick runs and crescendos, and “Dance No. 4 in F minor” features a tremolo bass line and dance-like staccato elements that return to a rolling melody which conjures images of dancers moving about. Audience members smile when they recognize the familiar tune of the final movement, “Dance No. 5 in F sharp minor,” the music scampering along, quickening and slowing down with precision.

Following avid applause, Venkatesh introduces the next piece, Schubert’s “Fantasy in F minor,” declaring it to be the composer’s “most beautiful and iconic work,” explaining, “It has a pleading melody over a pulsing bass” which expresses “love in all of its true form.”

Over the course of the piece’s five movements, Venkatesh and Schaumkell perform with power and precision as they communicate without words. Their precise playing and interpretation melds as they dance through this majestic work, the music transcending into sounds of dissonance and mystery at times. As the pair exchanges meters and moods, an ocean breeze rustles through the airy auditorium. Venkatesh and Schaumkell continue to impress as the sounds of the two nested pianos combine and float out over the audience. 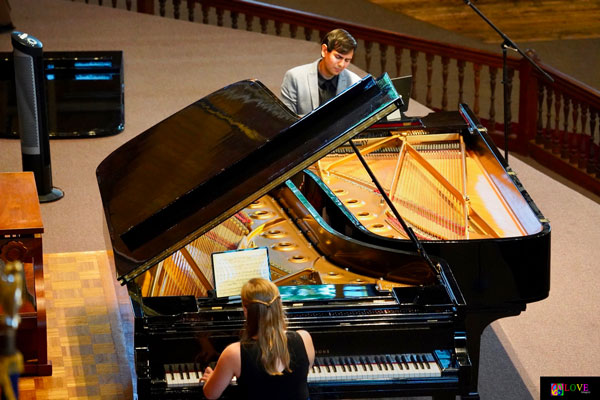 Large applause ensues and the couple takes a well-deserved bow before exiting for intermission. During the break, we chat with Gail, an audience member from Florida. Explains Gail, “I live nine months of the year in Florida, and three months here in Ocean Grove. Last year, there was no music here at the Auditorium at all,” recalling, “Even in this huge hall, we could only have 100 people here for worship — and I missed the music so much.”

Commenting on this evening’s performance thus far, Gail states, “I like The Vieness Duo very much; they sound so good!” disclosing, “A friend told me that musicians of this caliber need ‘concert grade pianos’ — the better you are, the better the piano has to be — so the pianos have to be to the musicians’ specifications and liking,” before concluding, “So far, this concert has been just wonderful!”

As Act II commences, Venkatesh and Schaumkell return to provide a dreamy interpretation of J.S. Bach’s “Jesu Joy of Man’s Desiring.” The warm sound emanating from the Steinways resonates throughout the hall and touches the audience gathered in this sacred space. The touch of the pianists is light and lovely as they play together with outstanding dexterity. 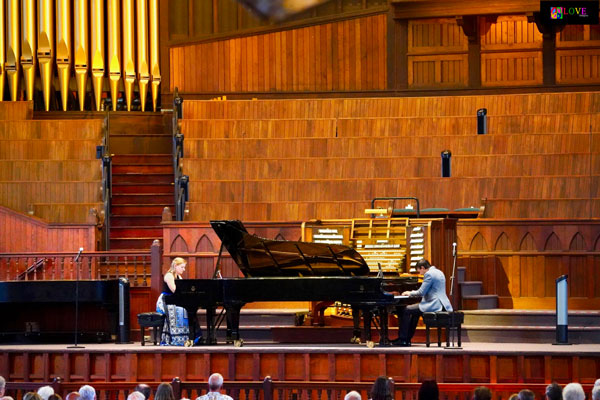 Following more applause, Venkatesh indicates, “This next piano transcription is close to our hearts,” revealing, “It was featured at our wedding last year.” Introducing Mozart’s Sonata in C major, Venkatesh explains, “This is the last sonata Mozart ever wrote. In the first few bars, you can hear the sheer joy of human existence.”

As the newlyweds launch into the piece, the interplay between them is intense. They become connected through rhythm and melody and play with impeccable timing through dynamic runs, echoing each other at times, as the piece trills and thrills along before ending to applause, cheers, and bows.

Schaumkell introduces Souvenirs by Samuel Barber explaining, “This next set of pieces, composed by the American composer Samuel Barber, are all based on childhood memories. The six pieces were all written for four hands, and Barber toured the world playing these dances.”

Souvenirs opens with “Waltz,” the 3/4 meter eliciting images of dancers whirling to the swirling melody. Hands prance with technique as the dance tune, “Schottische,” quickens to an impressive fury at the end. The mood changes to mysterious and dark in “Pas de Deux” as the music slows. Contrastingly, “Two Step” is a quick and happy jaunt as Schaumkell plays on the high keys and Venkatesh plays on the lower keys. There is no hesitation whatsoever as the virtuosos dance on separate pianos during “Hesitation Tango,” eliminating the physical space between their hands with strong chords and rhythmic melodies. 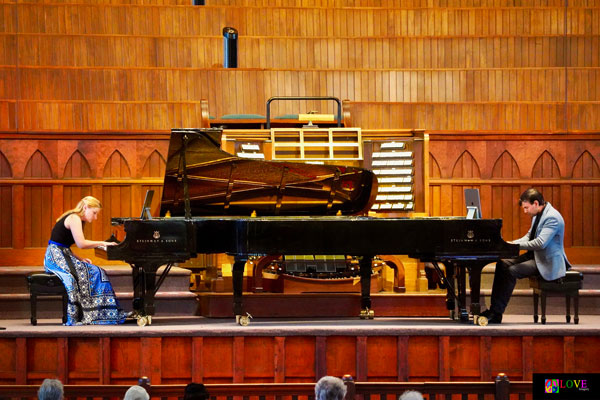 Ending with “Galop”, this bright and happy movement features running lines and rhythmic chords that interweave to create a satisfying conclusion. Cheers and applause ensue for the musicians who smile and bow.

Venkatesh and Schaumkell conclude tonight’s program with “Waltz No. 2” by Shostakovich, a majestic and regal dance, which sounds distinctly Russian. All four hands are in sync as they glide up and down their dual sets of keys. Breathing together as their musical phrases mingle, the duo creates a majestic kaleidoscope of sound with impeccable timing and evenness. The piece ends with a flourish, and the audience rises to it’s feet with shouts of “Bravo!” as the couple holds hands and takes more well-deserved bows.

After thanking the audience — stating, “It’s been so much fun to be back on stage!” — the couple responds by playing a short encore on a single piano to cheers and a final standing ovation from the happy crowd. 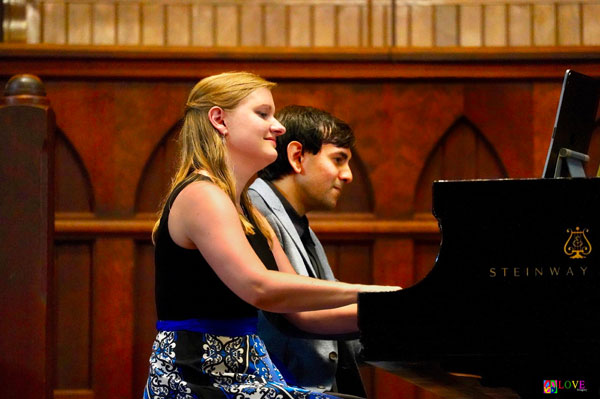 As we make our way out of the concert hall, we take a moment to chat with Eva Schaumkell and Vijay Venkatesh who are busily meeting and greeting fans outside the Great Auditorium.

When asked how the two musicians fared during the pandemic, Venkatesh acknowledges, “We didn’t play live for a year, but we did live-streams for several orchestras, and we also started teaching on an online teaching platform.” With regards to his thoughts on returning to live performances, Venkatesh maintains, “The energy between us and the audience is palpable. The adrenaline is a rush. You need that love from the audience.” Moreover, with respect to performing here at the Great Auditorium, Venketesh contends, “The acoustics here are unbelievable! It’s such a grand space, and it’s so resonant!” 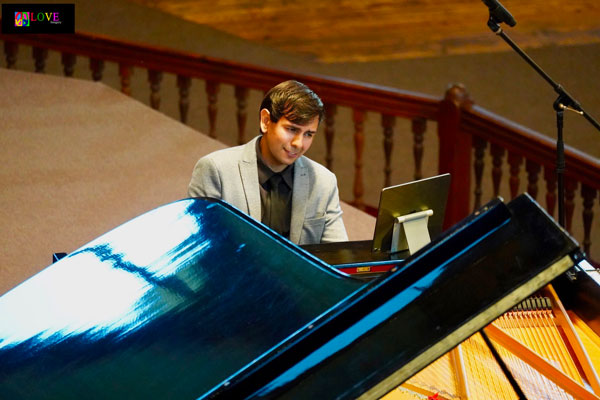 Schaumkell agrees, adding, “It’s incredible,” declaring, “We are so grateful to be back in front of an audience! There is nothing like the feedback — the immediate reaction of a live audience — we feed off their energy. Plus, it really helps to play in an inspiring place like this!”

We also chat with several audience members who share their thoughts on tonight’s performance. Comments Nancy from Yardley, PA, “I loved this concert! My favorite pieces were the Brahms, the Mozart, and the Bach,” before noting, “and Eva and Vijay are so cute together — they are very simpatico — I wanted to hear more!” Magdalena from Yardley, PA concurs, revealing, “This was my first time here at the Great Auditorium. I loved the Shostakovich and the Hungarian pieces; they were very energetic. I really enjoyed it so much!”

Lastly, we converse with Mike and Charlotte from Wall. Remarks Mike, “The technique and skill of both pianists was amazing to see,” acknowledging, “I never heard two Steinway Grands played together. The sound was unbelievable in here!” Charlotte agrees, pointing out, “And I especially loved the interplay between them,” before concluding, “The way they communicated really made the music electric!” 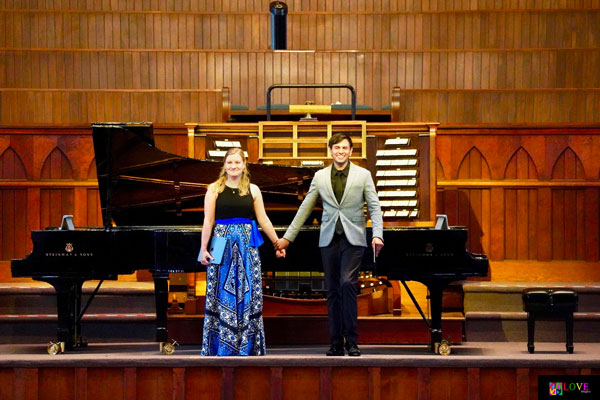 To learn more about The Vieness Piano Duo, please go to vienesspianoduo.com.