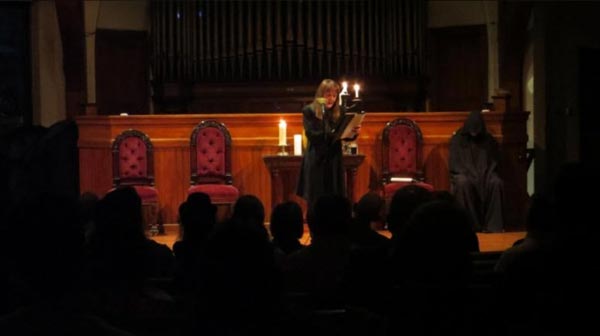 (CAPE MAY, NJ) -- The award-winning Equity professional East Lynne Theater Company presents two events in time for Halloween: "Nosferatu," the 1922 silent classic horror film, accompanied by Wayne Zimmerman on the organ on Friday, October 22 at 7:00pm, and "Poe by Candlelight" on Saturday, October 23 at 8:00pm. Both are being presented at The Cape May Presbyterian Church, 500 Hughes Street in Cape May, where the theater is in residence.

"Nosferatu" is based on Bram Stoker's "Dracula," in spite of the film's director, F. W. Murnau, changing the characters' names, and a bit of the plot. The full title of the film, "Nosferatu: A Symphony of Horror," lives up to its name. Max Schreck, who portrays the count, behaves more like an animal than a human, with ears like bats, claw-like nails, and fangs that are in the middle of his mouth like a rodent's. Special effects add to the uneasy atmosphere: the disappearance of a coach, the count materializing out of thin air, and photographic negatives used to give the appearance of white trees against a black sky.

Film critic Roger Ebert noted that "'Nosferatu' is more effective for being silent. It is commonplace to say that silent films are more "dreamlike," but what does that mean? In "Nosferatu," it means that the characters are confronted with alarming images and denied the freedom to talk them away. Those things that live only at night do not need to talk, for their victims are asleep, waiting."

Providing his own original musical accompaniment on the organ, is Wayne Zimmerman, who has been playing for ELTC's silent film series since 2011. He has played in a variety of venues from coast-to-coast and in Hawaii, regaling audiences with his silent film accompaniment and concerts.  At varying times he's served as organist at the Lansdowne Theatre in Lansdowne, PA, the Tower Theatre in Upper Darby, PA, the Brookline Theatre in Havertown, PA, the Merlin Theatre in suburban Philadelphia, and the president of the Delaware Valley Chapter of the American Theatre Organ Society.

Started in 2015, ELTC's "Poe by Candlelight" continues to be one of the company’s most popular events. This year, stories by the master of the macabre, Edgar Allan Poe, include "Bernice," "The Oval Portrait," and "The Tell-Tale Heart," read by Amanda Brinlee, Morgan J. Nichols, and Gayle Stahlhuth. Due to the pandemic, we’ll not be serving refreshments in the lounge before the hour-long performance, but we will have tasty treats "to go."

Amanda Brinlee is a recent graduate of Fairleigh Dickinson University where she performed in both new and classic plays. Currently she is ELTC's production assistant, but has also performed this season, in the company’s virtual reading of "Something to Vote For," and the live-in-person "Vaudeville Variety" and "Tales in the Backyard."

Morgan J. Nichols performed in ELTC's "Arsenic and Old Lace," "To the Ladies," "The Butter and Egg Man" and "Berkeley Square." He also landed roles in "Blue Bloods," HBO's "Vinyl," and other television shows.

Gayle Stahlhuth, who has been ELTC's artistic director since 1999, has been highly complimented for both her directing and acting in "The Wall Street Journal," "Philadelphia Inquirer," and "The New York Times." She's also performing in "Christmas with Harte and O. Henry" for the holidays.

Reservations are strongly recommended for both shows, and may be purchased through ELTC's website, eastlynnetheater.org, by calling 609-884-5898, or e-mailing eastlynneco@aol.com. Tickets for "Nosferatu" are $15, and $12 for "Poe by Candlelight." Ages 12 and under are free for both. Next up is "Sherlock Holmes Adventure of the Blue Carbuncle" on October 29-30 and November 5-6.