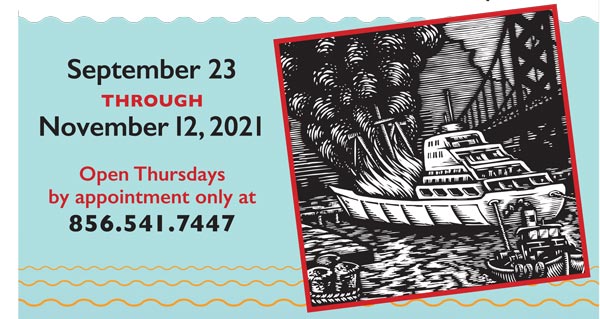 (CAMDEN, NJ) -- The Executive Director and Board of the Camden Shipyard & Maritime Museum has announced their re-opening to the public beginning September 23, 2021 through November 12th. Hours for their general re-opening are Thursdays Noon to 4:00pm and by appointment.  The will be a special open house on Saturday, October 10 at 2:00pm for a video chat with Italian Photographer Stefano Benazzo.

Executive Director, Jack O’Byrne is very excited to be reopening with two brand new exhibits to the museum. “As we reopen, we will be remembering the long and lurid history of the Delaware River with an exhibit titled, Disasters On The Delaware. The exhibit includes a disaster in 1777 when Revolutionary soldiers fired on a British warship and hit its powder magazine with a resulting explosion that shattered windows for over 16 miles.” O’Byrne continued, “In 1975, two oil tankers collided near Marcus Hook creating a fire so intense that the steel plates of the hull popped, launching the rivets that had been holding them, like bullets.” This exhibit includes 12 large-scale original woodcut prints designed by Brooklyn-based Cannonball Press, to help illustrate the disasters that struck the ships on the Delaware.

Their second exhibit, a photographic exhibit, is entitled Silent Witness: Photographs of Shipwrecks by Stefano Benazzo. The museum will display a collection of 60 photographs by this Italian artist and photographer. His work is from around the globe and narrates the scenes of these disasters at sea using natural light to portray the soul of the abandoned vessels. O’Byrne describes the photographs, “telling us the story of the decay of these vessel’s architecture as sculptures embedded in the landscape.”

The artist for “Silent Witness” is Italian sculptor, model maker, and photographer devoted his life to the memory of abandoned ships. His photographs tell a real story. His 50+ years of research led to him being invited to the Venice Biennale in 2015. His works have been displayed around the world in Italy, Ankara, Turkey, Greece, and France.

Although the ships that were built in Camden were intended for use outside of the safety of their berths here, the Camden Shipyard & Maritime Museum endeavors to give the memories of those ships, the shipbuilding industry from which they were born, and the maritime legacy of Camden, a permanent home and safe harbor. The museum is located at 1912 South Broadway in Camden, New Jersey.

The mission of the Camden Shipyard & Maritime Museum is to educate, inspire, and engage citizens about Camden's rich maritime heritage and significant contributions to global shipbuilding and seafaring exploration.  The museum will be an anchor institution for cultural enrichment and community development for Camden's Waterfront South neighborhood.