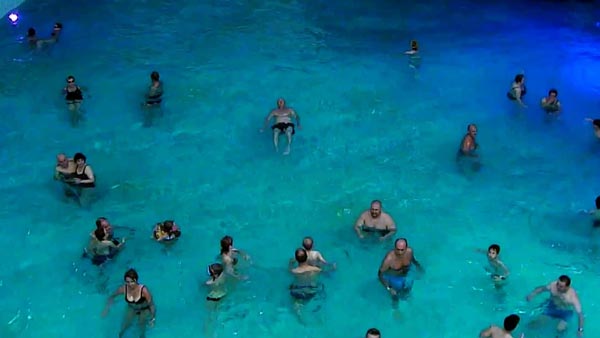 Ailleurs Partout (Elsewhere Everywhere)
, a feature-length documentary directed by Vivianne Perelmuter and Isabelle Ingold, gets its United States Premiere on Sunday, September 12 at the Fall 2021 New Jersey Film Festival alongside the experimental short Spinal. In addition to the 7 PM live screening at Voorhees Hall #105/Rutgers University,  these films will be available to stream online on the same date, starting at 12 AM.

This visually unique experimental documentary depicts the experience of young Iranian refugee Shahin Parsa as he awaits the decision of his application for asylum in England. Cooped up inside and not allowed to work given his refugee status, Shahin spends his nights observing the world through camera footage found on the internet. Throughout the film, chats, text messages, phone conversations and his responses to the immigration office’s questionnaire give us insight into Shahin’s solo journey from Iran to Turkey, Greece, and through Serbia before he eventually lands in the UK.

Ailleurs Partout opens with the description of a dream, Shahin’s, by a female voice, director Vivianne Perelmuter’s. She recounts in a deliberate manner, “He found himself on the open sea. No land in sight. Something must have happened. It was like after the end. But maybe it was the beginning. He didn’t panic right away. It was only after he realized he was alone that he started to worry. He called for help. No one answered. Not even his mother. I still don’t know if he told me this dream to remember it better or to forget it at last.”

Starting on a completely black screen, we hear her recounting alongside a constant, low buzzing and a regular beeping noise while the camera pans to reveal a dark, black-and-white image of an ocean horizon and a rocky shoreline. This opening effectively sets the tone for the rest of the film as we are quite often left in the dark, guided only by Shahin and Perelmuter’s disembodied voices.

From the start, the film builds a visceral experience out of its images and soundtrack, keeping us constantly on the move from one unknown place to another. Not only do are we unsure where the film is taking us, but it is often hard to actually see where we are, whether due to the image quality or lighting. Along with the ominous, technological soundtrack of low hums, buzzing, beeps and the crackles of walkie talkie feedback, Ailleurs Partout succeeds in making the world seem like a foreboding alien planet – mirroring the fear and isolation Shahin faces through his journey. As these sights and sounds continue throughout the film, the ominous feeling is increasingly present.

In its visuals, the film also elicits frustrating feelings of contradiction in its juxtaposition of movement and stasis between the endless supply of new views and the relatively sparse camera movement. Additionally highlighted by the evocation of travel in the many shots of roads, cars, and trains, this notion of constant movement is in direct opposition to Shahin’s inability to move on from an intermediary status and start his life in England. We are left sympathizing with his feelings of frustration as he tries, with little success, to compensate for being stuck inside by traveling virtually.

Plus, much like Shahin, we are isolated throughout the film, physically out of reach of other human beings. The security camera-esque height and angles of each frame often mean that human figures are far off in long or extreme long shots with their faces well out of view – underscored by the fact that many of these people are lone figures out in the dark of night. Over the course of the film, this elicits an increasing sense of seclusion, especially in combination with the movie’s narrations and brief conversations.

While Ailleurs Partout does feature several phone calls between Shahin and his relatives as well as some text message exchanges, all of his communication with the outside world seems to be mediated through the phone or internet, further adding to the seclusion motif. As with the film’s visual style, Perelmuter and Ingold create a sort of paradoxical experience whereby we see or hear one thing while the reality of the situation proves quite different. Although Shahin is virtually and tele-communicatively connected to others, he nonetheless remains separate from in-person interaction.

But, despite the gloomy tone often cast by Ailleurs Partout’s visuals, there is a light at the end of the tunnel. The film ultimately ends on a hopeful note as Shahin is granted asylum and a whole new world of opportunities become available to him. He dreams of reuniting with his mother in bringing her to England and building a better life, saying, “Anything will be possible soon… soon.”

Ailleurs Partout provides an intimate view into the experience of one young refugee’s journey from Iran to England, using unique visuals and a strong soundtrack to evoke his emotional state very effectively within the viewer. Be sure to check this film out at the New Jersey Film Festival (in-person or online) on Sunday, September 12. Go here for more info and to buy tickets for this screening.