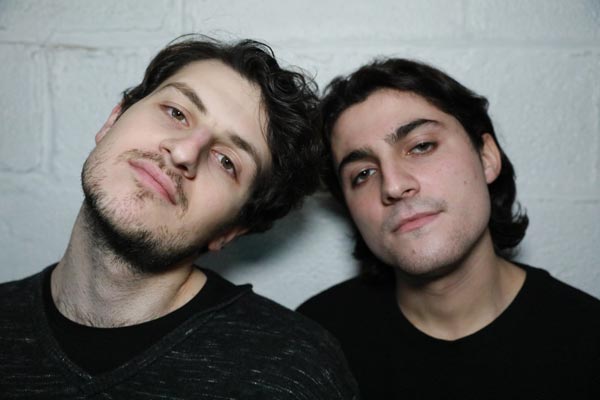 The dt’s are the new name of the duo featuring for Vaughns guitarist Dave Cacciatore and bassist Tom Losito. They are premiering their debut single, “You with Me,” in Makin Waves at New Jersey Stage. PHOTOS BY TOM GARRIGAN

Imagine if The Everly Brothers got into a street fight refereed by Brit singer-songwriter Harry Styles, while John Mayer tries to break it up as The Beatles drive by filming it on TikTok with Liam Gallagher of Oasis as their Uber driver.

Well, so do the dt’s, the newly Christened duo of former Vaughns guitarist Dave Cacciatore and bassist Tom Losito, formerly known as Dave & Tom. With the release of their debut single, “You with Me,”  the dt’s introduce their harmonic edgy pop to the world. And an impressive debut it is, makin’ its media premiere below, followed by an interview with Dave & Tom. We chatted about the challenges of producing “You with Me” as a duo in the midst of a pandemic and what lies in store for the talented tandem.

Besides the reference to your first names and former duo name, what is the meaning of the dt’s in relation to the duo and your infectious, irresistible music?

Well, when we first formed our project, we chose Dave and Tom because it was to the point. But then we wanted to have something that was catchy, simple and easy to identify while also keeping the duo aspect of our names. We decided on the dt’s for those exact reasons.

The dt’s is also short for ‘delirium tremens,’ which is a condition where someone has the shakes due to withdrawals from substances. While we did not base the name around this, we liked the idea of being ‘addicted’ to our music.

Why did you part with The Vaughns, and what has been the most challenging and rewarding part of producing music on your own as a duo?

Unfortunately, there were many reasons, but it came down to creative and operational differences. Music has always been something that brought us happiness and peace, but we were not experiencing that anymore with that project.

The most challenging part has been learning to engineer and produce our own music. While the process has been challenging, it has also been extremely fruitful. The process of writing pen to paper on our own experiences and music has been something we have both wanted to pursue for a long time. We are happy that we have each other to work with. We have a long history and friendship together that has let the process flow naturally, while also allowing our communication to improve.

Before the project, we were disillusioned with music due to having gone through emotional events both independently and together. Having that completely flip has been a big change for us for the better.

When did your form the duo, how did the pandemic challenge that formation, and how did you overcome those challenges?

We started our project around January 2020. Shortly after, we were gigging and rehearsing regularly. Prior to the pandemic, around early March 2020, we played the best Sofar Sounds show we have done over the years. It was a talented bill combined with a packed audience in Lower Manhattan with over 100 people. After that, we were excited about the summer because we had a lot of shows lined up with other friends and artists. Unfortunately, when the pandemic hit, all of this came to an abrupt stop. We had to cancel all gigs, and we were not able to get together for a few months.

We tried to keep our momentum and online presence alive by performing weekly covers and virtual performances on different social media outlets. These weekly covers turned into shorter clips, which then turned into shorter TikToks. They were a lot of fun to perform, and kept us on our toes! Some of these even got the engagement from well-known artists that we enjoy, such as Dan + Shay and Bob Weir.

While the covers kept us busy in a virtual environment, we also used that time to dive deep into writing individually and collaboratively, challenging ourselves as songwriters. The pandemic allowed us to focus on these skills and really concentrate on this instead of constantly gigging and being on the go.

From that writing we decided to get started on building our recording studio in Tom’s basement to capture these songs. Through our years of recording in different studios, and also being inspired by other artists we see doing it themselves, we decided to give recording ourselves a try. We acquired different equipment a little at a time, and went through trial and error and tons of research to refine what we were doing. 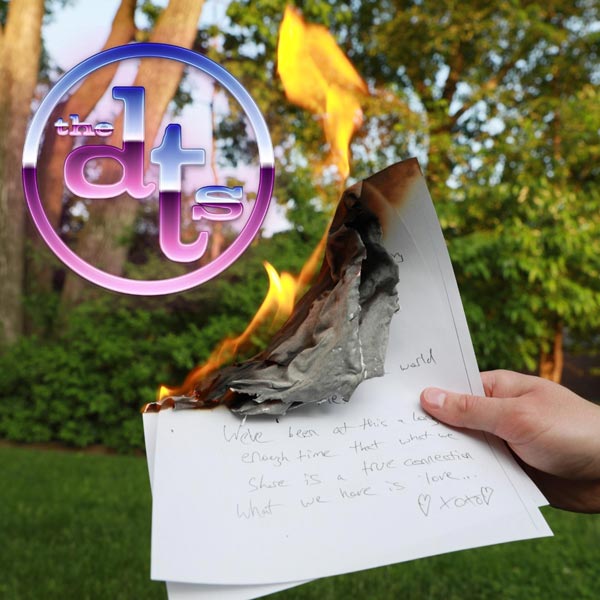 Did you strategically wait until the pandemic died down to release a single or was that serendipity?

We had planned for the summer for our first release, but we did not try to line it up with the pandemic. We just wanted to give ourselves enough time to prepare for the release. The song has an upbeat summer feel, so we felt it was good timing!

From both an artist and life experience standpoint, who and what inspired ‘You with Me’? Lyrically, ‘You with Me’ is a breakup song. It could be interpreted as a romantic breakup or as a platonic relationship whether that’s a friendship or someone you trusted. It shows how in the end, you realize you are better off without that relationship. For both of us, the song came easy to write. Those feelings and emotions spilled over as we wrote each line. Oftentimes, we find ourselves on the same wavelength, so the song came very naturally.

The idea of the song was written actually very quickly in less than an hour during one of our recording sessions at Tom’s house. We both brought separate riffs and melodies from other pieces we were working on individually and combined them into a more cohesive whole. We knew we wanted to write something that was catchy and upbeat while also having emotional depth in the lyrics.

Would it be fair to describe your music as a cross between The Everly Brothers and Cheap Trick?

We love both those artists, and you would not be far off describing our music using them. However, we like to think of and describe our music as if The Everly Brothers got into a street fight refereed by Harry Styles while John Mayer tries to break it up. Then The Beatles drive by filming it on TikTok with Liam Gallagher as their Uber. 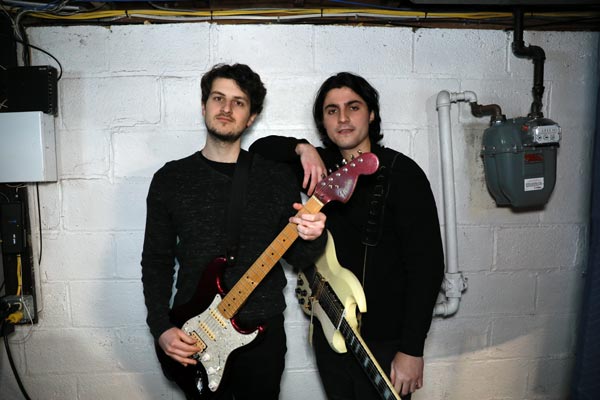 What was it like writing the song together line by line and then recording it in Tom’s home studio?

It was definitely a different method we hadn’t really experimented with in the past. It was really rewarding to have a finished song by the end of the night. The final product was definitely refined from that first night we wrote the song, but the structure and bones of the tune were put together in a few hours. We feel this song defines how we are always trying to expand and challenge ourselves as musicians.

Comment on the contributions that Frank Letteri of The Paper Jets and Dust Of Days and Joe Pomarico over at Telegraph Hill Records made to the single.

Our good friend Frank Letteri of The Paper Jets & Dust Of Days recorded drums on a full batch of our songs in his home studio setup. From the scratch drum ideas that we sent Frank, he did an incredible job of mirroring our parts while also adding his own flare through his powerful playing.

We then decided to work with our friend Joe Pomarico over at Telegraph Hill Records for mixing and mastering. We got to work with Joe this past winter at his home studio for Musicians on a Mission benefit show with other local Asbury artists and friends. After working with Joe, hearing his other work and always crossing paths, we knew he was the perfect fit. His experience and easy-going attitude made the mixing and mastering process very fluid. He made this song really pop!

You both play a lot of different instruments except drums. Do you plan to play live as a duo or have a drummer play with you?

Fun fact! When we record, we utilize Tom’s drum skills to record the scratch drum tracks to get our ideas down. We definitely try to incorporate as many different instruments and sounds as we can. We are always looking to experiment and keep our minds open.

In terms of playing live, we are currently still doing our shows as an acoustic duo, which we love, but we are looking to expand and have some friends help us in a full band live setting.

After not being able to play live for more than a year, how does it feel now that you can?

It’s really nice to start seeing more activity, shows and events happening around our area, so it is definitely long overdue. It keeps us optimistic, and we are excited to start playing a little more as things begin to open.

What are your performance and promotional plans in support of the single?

As we mentioned, over the last year, we have really tried to establish an online presence and continuing with that will be a big part of the single promotion. In a live setting, we are looking to play some more shows this summer to support the songs we have written and recorded.

When will you follow the single with a video, another single, and an EP or LP?

We have a batch of four songs that are done, which we will be promoting as singles as well throughout the summer following this release. After the ‘You with Me’ streaming premiere, we will be releasing a music video to provide a visual representation of the song. We have discussed possibly releasing an EP later down the line.

We just want to say that we are ecstatic about our first formal release! We are extremely grateful and appreciative of all the support and love we have received so far. This has been a long time coming for us, and something we envisioned for a while now. We plan to stay true to ourselves with this project, and hope we bring happiness to some listeners out there. We have a lot more to share in the near future! Thank you, Bob, for always supporting us, and the local music scene!