George Street Playhouse Concludes Season With "It’s Only A Play" 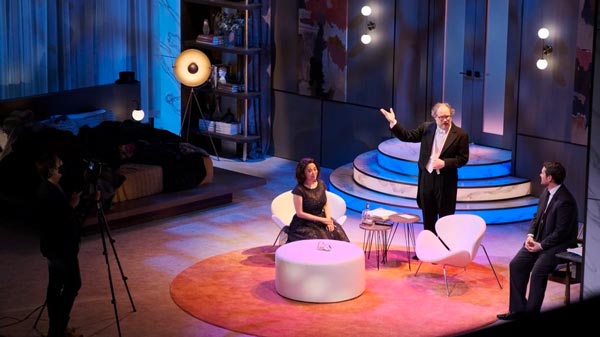 (NEW BRUNSWICK, NJ) -- George Street Playhouse (GSP) concludes its virtual season with “It’s Only A Play”, directed by Kevin Cahoon. This hilarious work by Award-Winning playwright Terrence McNally. Filled with sharp wit, ridiculous sight gags and a dash of Broadway magic, this is one play that is sure to keep you laughing until the end. Streaming will begin June 15 and will run through July 4, 2021.

﻿“We’d like to honor old friend Terrence McNally, whom we lost this past year by presenting his comic valentine to the theatre. It’s Only A Play reminds us all of the glorious world of a Broadway Opening!  There’s nothing like it, and we all look forward to returning for the celebration,” said George Street Playhouse Artistic Director, David Saint.

Professionally filmed onstage at the New Brunswick Performing Arts Center, Tony Award winner Terrence McNally’s hit comedy comes to life for this new streaming production! It is opening night on Broadway, and an unforgettable cast of characters, from the self-possessed leading lady to the starry-eyed coat check boy, is eagerly awaiting “rave” reviews. Equal parts uproarious and heartfelt — It’s Only a Play will remind you why there’s no business like show business.

Tickets are available for $33 per household at GeorgeStreetPlayhouse.org. Virtual Household Tickets will be available to purchase until 8:00pm EST on Saturday, July 3, 2021

Julie Halston (Virginia Noyes) - Julie was last seen on Broadway in her acclaimed  performance as Rita Marshall in “Tootsie”. Other Broadway performances include “You Can’t Take it With You “ ( Richard Seff Award) , “Hairspray”, “The Twentieth Century”( Outer Critics Nom) and “Gypsy”. She is a founding member of Charles Busch’s legendary theatre company and has co -starred with Mr. Busch in numerous productions inc “The Lady in Question “ , “Red Scare on Sunset” and “The Divine Sister”.  Miss Halston has received 4 Drama Desk Nominations, 2 Outer Critics Nominations , 2 Drama League Nominations and Lifetime Achievement Award from the Off Broadway Alliance . Television audiences know her as Bitsy Von Muffling on Sex and The City and Tina Carmello from The Class. Other TV credits: Divorce , Almost Family , Difficult People and Law and Order SVU .She and Charles Busch star in the soon to be released film , “ The Sixth Reel “ .Miss Halston has also received numerous awards for her SRO comedy performances at BIRDLAND and hosts a popular YouTube show , VIRTUAL HALSTON going into its third season .

Christine Toy Johnson (Julia Budder) - Christine is an award-winning actor, writer, director and advocate for inclusion. As an actor, Christine has appeared on Broadway and National tours (THE MUSIC MAN, GREASE!, CHU CHEM, CATS, FLOWER DRUM SONG, BOMBAY DREAMS, COME FROM AWAY), Off-Broadway (MERRILY WE ROLL ALONG, PACIFIC OVERTURES, CRANE STORY, FALSETTOLAND, BALANCING ACT and more), in regional theaters across the country (including the Guthrie, Williamstown and the Huntington) and nearly 100 television and film appearances (most notably recurring roles on Marvel’s “Iron Fist”, “The Americans”, “You”, “Law and Order: SVU”, ‘Bull” and more).  She’s written tons of plays and musicals and serves as Treasurer of the Dramatists Guild and is host of the Guild’s podcast "Talkback" on Broadway Podcast Network. Co-founder of AAPAC (Asian American Performers Action Coalition), founder of The Asian American Musical Theater Writers Project. Rosetta LeNoire, JACL, Asian American Arts Alliance, Obie awards for advocacy in diversity and inclusion.

It’s Only A Play is sponsored by Sharon Karmazin and the Karma Foundation. George Street Playhouse thanks the Snow Foundation for their support of their streaming platform