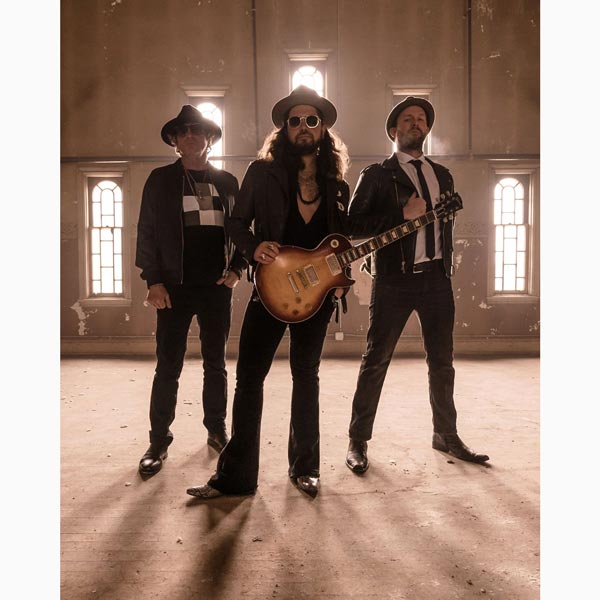 "For me it's where I started; I started in the blues-rock world and that's kind of where I am," says blues rocker Dustin Douglas as he discussed his band The Electric Gentlemen, their new record, video and more.

"All rock and roll music is rooted in the blues," is a quote many a rock musician has heard and/or lived by but some such as Dustin Douglas understand this to their very core. The blues music genre runs neck and neck with progressive rock as perhaps the toughest to sell and market; both always seeming to simmer beneath the music landscape until something erupts and pushes them to surface and in this ever changing climate of digital versus analog, downloads versus physical product, Douglas knows that one thing MUST be a constant and that is honesty.

"I like my blues pretty injected with volume and power but the feeling and the vibe and honesty of the traditional blues guys is what really makes me gravitate to that music. When I listen to that music it's the honesty; all of the Kings, Albert, Freddie and also there's Muddy and all of those dudes; "Zeppelin I" was my bible. I mean these dudes in these white suits took these blues tunes and injected them with power and that's all I really try to do; carry the flag or the torch. Whether it's Jack White or Black Keys, I just kind of re-imagine it for a new crowd and hopefully that crowd goes back and says; where did this all come from? For me that's the purpose of it all; just kind of putting a fresh spin on the old honesty of the blues and that's what it's all about for me."

Dustin Douglas and The Electric Gentlemen are in the process of assembling their still untitled third album and in doing so are navigating some uncharted territory; releasing singles and a video before the project is complete and yet while adapting, they have also managed to keep busy which makes Douglas very happy.

"I have a solo record out; I was in The Badlees for a few years playing second guitar and after that kind of dismantled I recorded a solo record and then The Electric Gentlemen were formed," he explained. "We have a self-titled and our latest which is about two years old called "Break It Down;" so, this will be our first new music in about two years."

"Yeah," he continued with a laugh; "It's nice to say that we are busy these days. We just put out a new single on April 30 and we're kind of doing it the way the industry is going right now; you give away half the CD as singles and then the CD comes out (laughs). So, yeah, we're going to release a few singles first to just try and ease us back into things and that seems to be kind of the norm right now from what I see; whether it's John Mayer or Royal Blood; it's amazing. I mean you're talking five singles before the record comes out and you have half a released record and half not. I think it's the A.D.D mindset really setting in; the beautiful thing about making a record is that it could be a cohesive piece like the concept albums used to be and that's where I feel like it is just going away because you have to go into it today with a mindset that every song is a single. Man, times are changing again and it's a daily thing and you just have to roll with it. There's great bands doing stuff out there but it is certainly harder to access and it is certainly not in the forefront."

Like the rest of the world, things ground to a halt for Douglas and the band over the last year and as is the case with many other artists they have used their time away from the stage to get creative.

"Honestly, the machine shut down and it took a bit to adapt that; not being locked into a schedule or the calendar book and obviously it took a little bit to adapt to that but once I got used to that I thought; let's make the most of it. I spent time with my fiancé and my dog and it was nice to relax and then I thought, I've got to do something or I'm going to go nuts. Then the writing began and we went into the studio and recorded four tracks, about half of a record so we have four done already. We started sending ideas back and forth to each other and there might be another solo record in the future; there was a lot of music written in our down time."

So, with half an album recorded, the decision was made to release "Broken" along with a video to accompany the single and it just so happens that they found the perfect location; even if the cold temperatures upstate were less than ideal.

"We worked with an awesome director who we've worked with in the past, his name was Jonathan Edwards. There was this old theater which is currently being restored in Wilkes-Barre, Pennsylvania where we are from; The Irem Temple Performing Arts Theater and back in the day it was "The spot" and after years and years of it not being used it was kind of dilapidated. So, I thought it was the perfect scene for the vibe, a broken-down theater; "Broken" being the single. We went in there and I do believe it was one of the coldest days (laughs), I believe it was warmer outside than it was inside and we did about a 13-hour shoot; although I felt like I needed my feet amputated at times the result was pretty good (laughs) and it was released first on "Rock Blues and Muse" and then worldwide."

So; how did they discover such a location?

"Ironically, I was scrolling through Instagram and a photographer who we worked with named Brittany Boote was down there taking pictures for something to do with The Irem Temple restoration project and I saw the pictures and we were starting to get ideas for shooting a video and thinking about locations but nothing was really wowing us and she put up pictures and I sent her a text saying; where are you? What is this? Fortunately the director that we were going to work with was friends with the head of the restoration project and it all worked out and there's nothing better when that happens."

When asked about a potential release date for the upcoming record, Douglas was confident it will be later in 2021.

"I would say in the fall; I know that after "Broken" we are going to release another single pretty quickly, probably about two months after so we can get something out there and keep things moving; we have a few working titles but nothing yet."

Featuring a true blues line-up; the band consists of three members and as the calendar turns from Spring to Summer; things are heating up for the unit.

"We are a power trio with myself at the helm doing vocals and guitar, Matt "The Dane" Gabriel on bass guitar and Tommy Smallcomb on the drums. I couldn't ask for a better rhythm section, they hold it down and I'm excited to say that we have quite a busy schedule coming up over the next few months. We celebrated the release of the single on May 1 at The Mauch Chunk Opera House in Jim Thorpe, Pennsylvania which is a beautiful little theater. We've got a few things that are crackin', a hometown show here at a club called Karl Hall and that's an outside series; the phone has been ringing and the calendar has been filling up and that's a beautiful thing and it's a good thing to be coming back."

With no tour on the horizon just yet; they have booked a series of local shows near their home town of Wilkes-Barre; to discover more about those dates or more about Dustin Douglas and The Electric Gentlemen, please visit www.dustindouglasmusic.com .