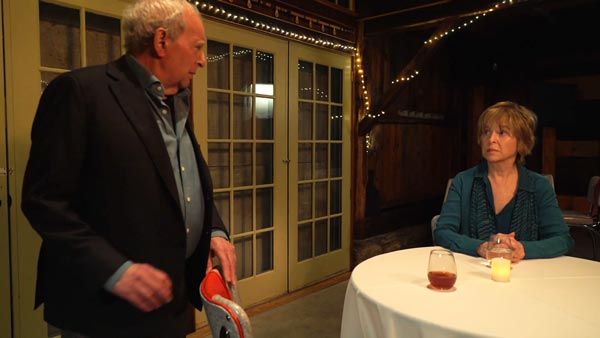 (LONG BRANCH, NJ) --  New Jersey Repertory Company (NJ Rep) presents The Nice Man Cometh - a Virtual Serial with a cliff hanger at the end of each episode presented over five consecutive days starting today, Monday, April 5 with Episode One. The serial concludes with Episode Five on Friday, April 9. The Nice Man Cometh is a voyeur’s eye-view of a courtship between Frederick, a recent widower, and Clare, a beautiful divorcée, who meet on the dating app Tinder.  Although they have both been around the block before, they are unprepared for the path that lies before them in this contemporary adult romance with  adult language and  situations.

On Friday, April 9 at 7:00pm, NJ Rep will hold a live stream Q & A with Jill Eikenberry and Michael Tucker. If you would like to attend this special event please email us at njrep@njrep.org to get your zoom invitation. If you are unable to attend the live stream zoom, please email us your comments and questions. We welcome hearing from you, and as always, "enjoy, enjoy the show".

The Nice Man Cometh was filmed and edited by Karen Thorsen and Douglas Dempsey.  Click here to view the videos.

JILL EIKENBERRY is perhaps best known for her portrayal of Ann Kelsey on NBC's long-running hit series "LA Law", which earned Jill four Emmy nominations, two Golden Globe nominations and a Golden Globe Award. Jill has starred on Broadway in "Moonchildren," "All Over Town," "Summer Brave," "Watch on the Rhine" and "Onward Victoria." She won an Obie award for her off-Broadway performances in "Life Under Water" and "Lemon Sky." Jill's more recent New York appearances have been in "Enter Laughing, the Musical", "The Kid," for which she received a Drama Desk Nomination, "Jericho," and "Evening at the Talk House" by Wallace Shawn. In 2016 Jill and her husband Michael Tucker appeared in Michael's first play, "The M Spot" at The New Jersey Repertory Company. She also appeared in Michael's second play "Fern Hill" – first at The New Jersey Rep and then at 59E59 Theater in New York. Currently Jill is part of a new streaming theater company, New Normal Rep. Jill appears in their first production, "Jericho" by Jack Canfora, which is streaming online until April 4 th . Jericho also debuted at New Jersey Rep. Her feature films include "Butch and Sundance: The Early Days," "Rich Kids," "Hide in Plain Sight," "Arthur," "The Manhattan Project", "Something Borrowed", "Young Adult" in which she played the mother of Charlize Theron, and the recently released "In Reality." She has starred in numerous TV movies including "An Inconvenient Woman" with Jason Robards and "Chantilly Lace" for Showtime. Jill just completed filming on a sequel to "Chantilly Lace" which was shot in Henderson NY. Jill co-produced a one-hour documentary for NBC entitled "Destined to Live," which dealt with the emotional aspects of breast cancer, from diagnosis to recovery. The film was honored with a Humanitas Award.

MICHAEL TUCKER is an actor, author and playwright. His first play, The M SPOT debuted at The New Jersey Repertory Company as did his second play, FERN HILL, which then went on to a run in New York at 59 E. 59 th St. Theater. He has also written three memoirs and a novel, AFTER ANNIE. He has acted over the last fifty years in theater, TV and film, most notably in the TV Series, L.A. Law. His 8-year stint on the popular NBC- TV drama brought him three Emmy nominations and two Golden Globe nominations. Off-Broadway: An Evening At The Talk House, Based on a Totally True Story, Modigliani The Rivals, Mother Courage. Broadway: "Trelawney of the Wells" at Lincoln Center, The Goodbye People, I'm Not Rappaport as well as principal roles in The Merry Wives of Windsor, Measure for Measure and The Comedy of Errors for Joe Papp in Central Park. Michael's film credits include Woody Allen's Radio Days and The Purple Rose of Cairo, Barry Levinson's Diner and Tin Men, Paul Mazursky's An Unmarried Woman" Lina Wertmuller's A Night Full of Rain, "The Eyes of Laura Mars, Network, Checking Out. For Love or Money with Michael J. Fox, Mighty Ducks II, a Disney hit, and Till There Was You with Jean Tripplehorn.