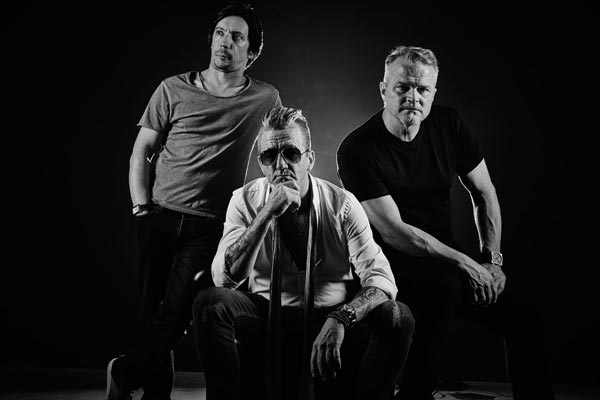 "I'm in the Bahamas and this is where my children were born; I've been here for a number of years and we're back and forth to Spain which is where I met Adam and Christian. Adam and Christian are from England but they're now over in Spain. I'm American but our rhythm section, our bassist and drummer are friends of mine who are studio musicians here in the Bahamas; so they are Bahamian. So, it is kind of an intermingled group; it kind of reminds us of what we saw with The Police who had cross Anglo-American synergy but it works really well."

"Intermingled," as aliensdontringdoorbells guitarist Dorian Foyil states is perhaps the perfect description for this rock band whose roots are spread as wide as their intergalactic name.

Fortunately those roots find ways to converge into one very cohesive trunk which has recently come together with the result being a debut album titled, "Arrival."

Forget being in different countries; these gentleman are on different parts of the globe, which according to lead vocalist Adam King isn't always conducive to an easy work environment. So, how do they practice and record an album over such vast distances?

"It is difficult; we obviously had the album and most of the videos prepared before this lockdown and we're waiting now for Dorian to get back here," he explained. "I've had the opportunity to get over to Christian's (keyboard player Pearl) house a few times and we've been writing a few new tracks but we've done a lot online and we've had sessions where I've phoned up Dorian and we've sat around and played through some of the songs that he's been writing as well. We are constantly in contact and it's hard to actually sit in a room together and rehearse properly but we still use it to get ideas together and listen to each other's music and write. We've got a cover band that we perform in here in Spain which Dorian is part of as well; it's a little side thing that helps us rehearse and getting everybody together to rehearse and getting everybody together to rehearse is a nightmare. Obviously it's different now but during normal times it's always been a nightmare, I guess that's a musician's trait; don't you think? (laughs)"

Putting the new album aside for a moment; the band is often asked and perhaps rightfully so about their unusual name. The explanation is as unique as their sound but the name also lends itself to their creative process as well; as Foyil and King are quick to point out.

"We knew that was coming," they laughed in unison. "Me and my young family; I was walking with my six year old boy and some old guy was walking down the subway platform; we were in New York and he was talking to himself which sometimes happens and he looked down at my young son and said, "It's because aliens don't ring doorbells" and he walked off as he continued his conversation," laughed Foyil as he recounted the incident. "That just stuck in my head and I brought it to the guys and we all thought hey, it might stick and we actually think it makes a lot of sense in a strange way; well, it does to us and it stuck so we kept it."

"It's one of those names that just came out, "continued King." Like we always said before, if you look at names like The Rolling Stones or The Beatles; not comparing us to absolute giants like that but names like that, when they first came up; hey I've got a great name for a band, The Rolling Stones; people would go oh, OK. So, it's a name that has grown with us and stuck really well and we've had so much feedback from it. So, whoever that man was; or was he an alien walking down that platform? We don't know to this day but we owe him a drink (laughs)."

"There's a lot of things about the alien and with sci-fi; you can see a lot of that influence that we've passed on to our directors in our various music videos on our aliensdontringdoorbells site on YouTube. "It's Your Night" was like a 3-D graphic, alien encounter love story and this most recent one,"Daylight"which just came out is a beautifully filmed sci-fi movie and we all need a little "Daylight" in our lives and this is an interesting little sci-fivignette if you will; in three minutes you get a whole movie. That's kind of one of the goals that we have with our videos; to present a concept in total within the song and"Boom"get it out and if you look at our other videos like "Slipping Away"or"Story;" it is a small little movie rather than us just sitting on a chair looking at each other miming the words,"added one time Scotch Plains and Millville, NJ resident Foyil.

"I think that is what helps us as well, "echoed King. "As you get older and you write songs, you write songs and lyrics about things that you've achieved, or that you've done or that you know about and the idea to have these videos as well; all of the songs portray really deep meaningful stories in their own little way an the videos run alongside that to show that there's more of a passion and feeling to them as well. We've had discussions about this as a band; when you're performing a tune, especially as a singer, you've got to put your passion into it. You've got to understand it; I actuallyvisualize songs in my head; even when I do covers I visualize things in my head to portray the passion and if you're doing that, the audience in turn creates their own passion themselves and love it for what it is."

The name and the video concepts are all part of the marketing scheme which of in itself has also got to be on a global scale and their approach is one to one music to video and it seems to be working well; an example being their recently released single "Daylight."

""Daylight," began Foyil, "The way we did it since the album wasn't released until a short time ago; we are active in both the United States and the UK and in the UK it's a little more about releasing singles. So, we would release a single and because we are committed to producing these music videos because we really like doing that with our songs, we are releasing a single with a music video; this has generated an initial interest in our music. Our "It's Your Night" song made it to number 36 on the Billboard Top 40 indicator chart which is a pretty good measure of what radio stations are spinning at the moment. So, we started to build an audience and then finally we released the album and now we have vinyl available for purchase."

"We've released four singles off the album," said King, "A lot of artists will only release one single but we've had great feedback so we've managed to release four and this is the last single off of the album. There's other stuff coming out every week, every month on YouTube. We've got other plans but single wise off the album, "Daylight" has just come out and so far the response has been great because we all need a bit of daylight in our lives; don't we? (laughs)

Returning once again to the name; not only is it an attention getter but the way it is presented is also not the norm.

"It's just a quirky thing," says King, "I think Dorian made that decision. It was just so we could do something different with it, let's keep it lower case and it works perfectly."

"My thinking was that people could digest it as kind of a picture, as one statement," laughed Foyil. "Adam was talking about how he sees his songs as a picture and then how he puts his words to the picture that he sees in his head when he's creating. With aliensdontringdoorbells, they'll just see it as a picture so we made it all in small case to get that across. Yeah, all the combinations, all the little things; some of these decisions were made basically on the spur of the moment but they made sense to us as we've gone along and sometimes that happens and you've just got to follow it when that inspiration grabs you and that's the explanation for the way the name is written."

"We're getting such great response with it," said King excitedly. "It's a big positive for us that we've gained so many new fans across the world with the internet and the downloads of the album have been absolutely phenomenal. So, we just want to say a big thank you to everybody who has come into it and the fans themselves."

Ah, the fans; since the group has only released their first album; how do they intend on staying connected to and grow their fan base? King says it's all about that very thing; connection.

"We really orientate around our fans and new listeners so we're releasing stuff every single week on YouTube. We do daily posts on Facebook and Instagram; we plan to go on Instagram and do a Q & A on there. We are doing so many radio interviews as well; this is our sixth one today. So, if anybody wants to see us and see what's going on; come and follow our social media because we are constantly putting something on there. Recently we posted video of Dorian taking the dog for a walk on the beach; so we keep it personal, we keep it about the music and the videos as well. So, there's a lot going on, so keep an eye out. Actually, if you go onto our Instagram, Facebook and the website we have what is called a fan link in the bio and you click on that and it's got all of your downloads and what's on Spotify, the YouTube links and everything; it's really easy to find."

So what does 2021 and beyond hold for the "Out of this world" unit?

"Right now,"concluded Foyil, "Our plan is to finish releasing all of the songs on the album and then go into the studio to record our next album in April of 2021. Currently we have recorded a number of our songs in a semi-acoustic, sort of play at home version. We did "Story" and we also started covering other artists that we like."