Makin Waves with The Outcrops: Band of the Year 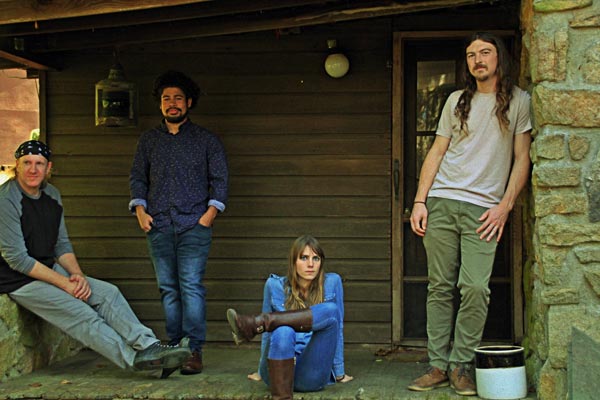 The Northwest Jersey jam ‘n’ groove band The Outcrops are the 22nd annual Makin Waves Band of the Year for three reasons: a work ethic that makes them one of the Dirty Jerz’s hardest-working bands even in a pandemic but otherwise sometimes doing two shows the same day in different states; guitar-playing that fuses the sounds of my two favorite axemen, Duane Allman and Jerry Garcia, and a refreshing fusion of roots, soul, blues, funk, and psychedelic rock that sounds wholly new while comfortably familiar. That boundary-busting sound can be found on their awesome 2019 debut LP, “Peace of Mind,” produced by Northwest Jersey jam master Tim Carbone of Railroad Earth and formerly Blue Sparks from Hell.

Formed in 2016 by lead guitarist Bryan Schroeder and lead vocalist-rhythm guitarist Cassidy Rain, The Outcrops also will appeal to fans of Tedeschi Trucks Band, Grace Potter, Spin Doctors, and Edie Brickell & the New Bohemians. Rounding out the lineup with bassist Jason Casanovas and drummer Dave Moore, the band’s show-must-go-on spirit has led them consistently to play live and virtual shows either as a full lineup or the original duo of Cassidy and Bryan. On Dec. 27, The Outcrops will play The Stomping Ground in Putnam, Conn. In 2021, they are scheduled to open for Three Dog Night and The Outlaws. In the meantime, enjoy this interview, as well as this premiere of their new video for a forthcoming single, “Isolation Blues”:

How did The Outcrops get together, when, and with whom?

Cassidy: Bryan and I started the band in 2016. His uncle’s band had a residency at the ski resort Mountain Creek, and they had us open for them every week. We had been practicing in the basement, just having fun and around Christmas time, his uncle told us that we had better be ready in two weeks to play live. We didn’t think we were ready. Bryan’s cousin Rachel Deflumeri played guitar, drums, and sang lead and backup vocals. His friend and bandmate from other projects, Nick Nucci, played bass.

Who is in the band now, and what is their role? 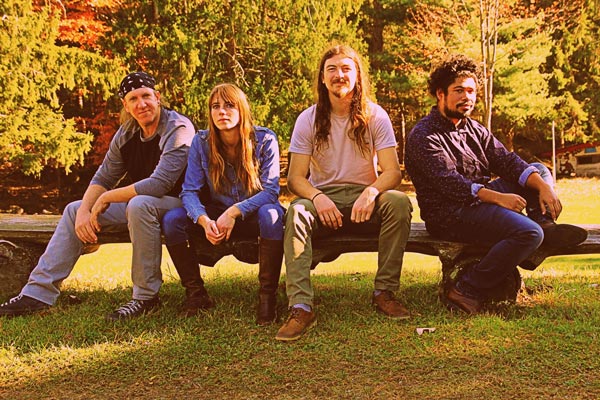 The Outcrops will play Dec. 27 at The Stomping Ground in Putnam, Conn.

What is the greatest musical common ground between you and why, and how has that influenced the band?

Cassidy: I think we all really appreciate original music and improvisation because of the creativity behind both. It gives our music its personality so to speak.

Bryan: Rock ’n’ roll is our common ground, even though we have a variety of different influences. Rock 'n' roll is really a stew of all different styles of music.

I love the way Bryan’s playing bubbles like Jerry Garcia and soars, chirps, and crunches, like Duane Allman, my two favorite guitarists. Bryan, please comment on how and why they and any other musicians inspire you.

Bryan: Both of those players in particular told stories through their music and solos. I think what attracted me to their styles is that they are very melodic and outside-of-the-box players.

I also love the way the band musically and vocally seemingly easily can jam ‘n’ groove from blues to soul to funk sometimes within the same song. Comment on how and why you like to mix things up and break musical boundaries.

Cassidy: We have so many influences from so many genres of music, some modern and many classic. These genres really do root from a common ground, and our ears are open to this, so it is natural for us to have that sense of variety.

Jason: We like to mix things up musically because that’s when we see our styles blend into different genres and tempos. 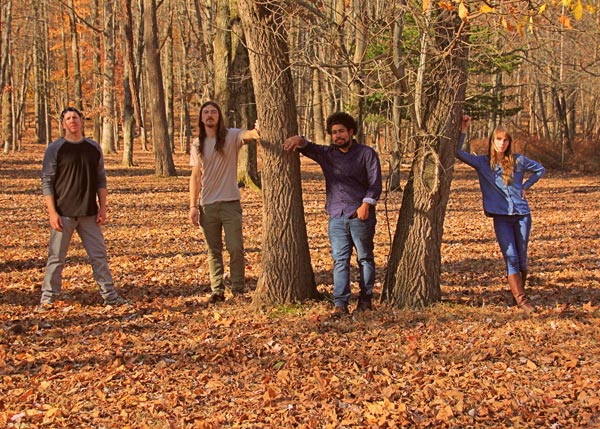 Before the pandemic, I thought The Outcrops were the hardest-working band in New Jersey, sometimes doing two shows a day in different states. Throughout the pandemic, how have you been able to focus on playing live and/or virtually as much as possible, what has that been like professionally and personally, and how has it paid off?

Cassidy: Live music and traveling is where our hearts lie. We, unfortunately, like most other artists, had an entire year of shows canceled, and everything further seems to be on hold. We really relished our outdoor shows at the live music venues supporting local bands, as well as all those who came out to the shows. These crazy times have shown us that we have so many great people supporting us at our shows and in the online community.

What has been your greatest accomplishment during the pandemic and why, and how did that impact the band?

Bryan: I think our greatest accomplishment is sticking through this and still getting together to be creative. It’s important to always stay motivated, whether it's practicing or listening to music.

Dave: We have strengthened the band’s direction and sound and time to get in deeper with musical expression.

How did you hook up with your manager, Jay Januzzi; what does he bring to the band, and what have you accomplished with him that you wouldn’t have been able to without him?

Cassidy: We played a show at the Stanhope House in 2019, and Jay was in the crowd. We knew him as the lead singer-songwriter in Citizens Band Radio, but we didn’t realize he was working as an agent at a booking and management company. He reached out to us after the show and told us he was interested in working with us. Jay, Bryan, and I got together for coffee and talked for what was probably close to four hours. We were stoked to work with him and our connection has been so beneficial. Jay booked us some of our best shows to date, designed most of our show posters, and as someone with over 20 years in music, he provides us with great advice on the business.

How are spirituality and mindfulness an influence on band members, especially during these trying times?

Cassidy: On a collective level, we are so grateful for the shows we do have and those who support us. We are constantly looking to improve all of the elements of our show so that we can bring an even better experience to the stage when we return. I have always felt that almost nothing pulls you into the moment so intensely as a live concert. The more we can create that sense of presence through our music, the more we connect with others, the better. Music in its own right can really be a spiritual experience, whether you are listening or playing.

On a personal level, we all have our own spiritual and mindfulness practices that are important to upkeep in trying times like these.

Jason: Spirituality and mindfulness are definitely important because life would probably be boring without them.

Dave: We as a band are also a support to each other spiritually, personally, emotionally.

You are releasing a video for a new song. Please provide as many concept and production details as possible for both.

Cassidy: We are releasing a live recording music video to our new song, ‘Isolation Blues.’ I wrote the song when we were in lockdown back in the spring. It touches on the state of the world with a slightly grim and definitely questioning tone. We are in a strange era right now and it’s hard not to question it all. There will be a lot of songs to come from this I think. A lot of mine are probably going to be reminiscent of John Prine’s ‘Spanish Pipedream’: ‘Blow up your TV, throw away your paper. Go to the country, build you a home.’

When and how do you plan to follow up your debut LP, ‘Peace of Mind,’ with another album?

Cassidy: We do not have plans yet for our next album, but we have been writing and hope some of these new tunes will make the cut for it. We will see what 2021 brings!

What are your plans in between the forthcoming video release and the next album?

Cassidy: We have been working on some home recordings.

Bryan: Dave has recording gear. It has been motivating to record and work on the production of our own songs.

What would you most like to accomplish that you haven’t yet?

Cassidy: We would love to start booking cross-country tours. Bryan and I have road-tripped to dozens of national parks out west, and we can’t wait to get back out there with the whole band.

Dave: We would most like to be touring and creating the best music in the universe and beyond.

How does it feel to be named Band of the Year by the 22nd annual Makin Waves Awards and why? What does that mean for you?

Dave: It's an honor to be named Band of the Year and hope it helps propel us to be a more well known band.

Cassidy: We sincerely appreciate it! It means we are making a difference in some people’s lives with our music. That makes me feel like this project is important and encourages us to keep on keeping on.

Joe Biglin, the keyboardist on your album, is getting Keyboardist of the Year from the Makin Waves Awards. Given that, please comment on how you liked working with him on the album, if you've ever done so live, do you plan on working with him again, how and when?

Cassidy: Joe Biglin has been amazing to work with. He is such a kind and genuine soul and an incredible and creative musician. He definitely brings good energy to any project. We try to have him on live shows whenever we can.