Blended Media, History, and More in "Federico Solmi: The Bacchanalian Ones"
By Shen Shellenberger, JerseyArts.com

I took a slew of pictures when I visited the Rowan University Art Gallery recently to see “The Bacchanalian Ones.” I took close-ups. I took panoramic shots. I took pictures from several angles and perspectives. And I thought I had done a reasonably good job of capturing the spirit of the exhibition.

But after I returned home and showed the photos to my son, I realized that even the best photographic images cannot convey the energy and intensity of this exhibition. It simply must be seen to be appreciated.

Although my pictures did a perfectly fine job of showing the vibrant colors, the exquisite details, and the bold imagery, unless you are physically in the gallery, with the sights and sounds of Federico Solmi’s videos and paintings all around you, the experience is incomplete.

The exhibition was curated by Mary Salvante, the Gallery and Exhibitions Program Director at Rowan University Art Gallery. Salvante has been active in the visual arts for more than 20 years, and, time and time again, she brings to the art gallery contemporary artists whose works and concepts spark the imagination and offer creative inspiration for students and visitors alike. 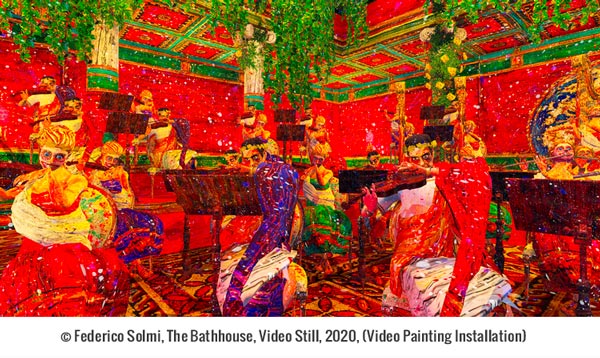 Federico Solmi is one of those artists.

Sadly, because of the pandemic, the art gallery closed to the public in mid-March. And although she is extremely pleased with the online content they presented during the closure, Salvante admits that a virtual show just does not compare with viewing art in person.

The gallery reopened in November, and Salvante could not be more thrilled.

“It is great to welcome people back to the gallery,” Salvante said. “Federico does such amazing work. It is hard to appreciate the scale and the intensity of the imagery unless you are standing in front of it.”

“Inspired by ancient mythology, modern myth, and contemporary celebrity culture, Solmi has blended together historical characters and depicts them as ghoulish, self-indulgent, degenerate devotees of the cults of Bacchus and Dionysus concerned only with their own power and influence.”

How is that for a teaser?

Once in the gallery, my first question for Salvante was “where did you find this artist?

“Before all this,” Salvante said, referring to the pandemic restrictions, “I went to a lot of galleries and art fairs in Philly and New York.” 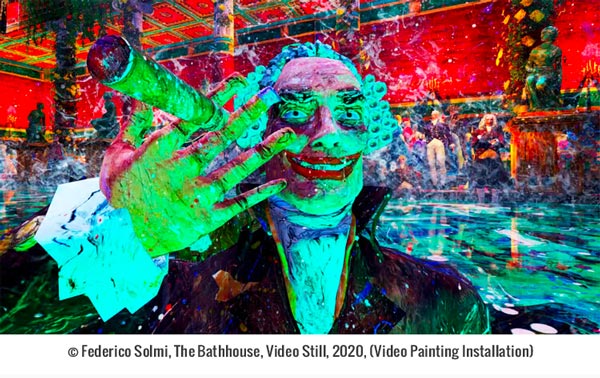 And, in 2019, as she was walking around the Armory Show, she heard this parade-like music that grabbed her attention.

“It drew me in,” said Salvante. “I went into Federico’s booth – this is when I first saw his work – and he had videos playing, like these in the gallery. I was looking at the animation – the artistry and complexity of the imagery – and I said to myself ‘I have to bring this artist to Rowan.”

“I didn’t know about him before that,” Salvante continued, but when she thought about the exhibition theme for the year – which was artists who work with technology and animation – she knew Solmi’s work would be an excellent fit.

She got in touch and went to Brooklyn to visit Solmi’s studio. Then he came down to Rowan to see the space.

“He said he wanted to add some things, to add something new for this show,” she said.

The new piece he created for this exhibition is “The Bathhouse,” a dynamic multi-panel video painting installation.

“It is actually a five-channel video – more than nine minutes in length - that plays sequentially,” Salvante explained. “At times, all five screens are showing the same scene, then it changes to individual scenes.”

“You have to look at it a number of times,” she said, “I am always seeing something new.” 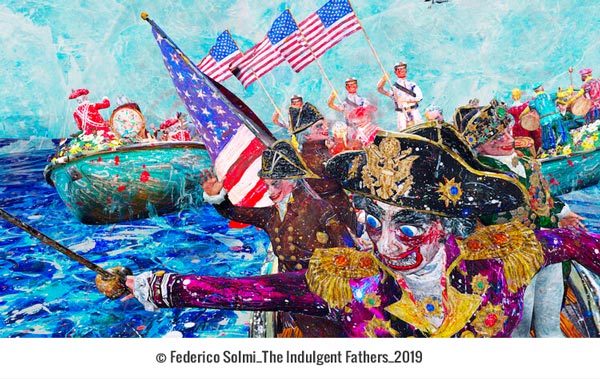 In addition to being visually captivating, the work includes an original soundtrack by KwangHoon Han, a Korean-born composer, musician, and arranger who says on his Facebook page that “I experienced a series of mixed emotions and historical juxtaposition of present and past while working on this magnificent surrealistic artwork.”

This exhibition is filled with edgy, provocative material, but that is not uncommon for the Rowan Art Gallery.

“I think one of the reasons that artists like to show in university settings is that they can experiment and take some risks,” Salvante said. “And they also have the chance to work with other academic areas – like computer engineering, which we did for this exhibition.”

To create a work like “The Bathhouse,” Solmi partnered his intricate images with cutting-edge tools and applications that turned his paintings, drawings, and figures into animated forms.

And while Solmi’s creative process is complex, he works hard to keep the technology hidden.

“For his videos, for example, he builds wood frames and installs monitors behind them,” Salvante explained. “Then he puts plexiglass over the front and paints onto that.”

“Unless you look very closely, it’s hard to see where things start and stop.”

To see the augmented reality component that adds action to “The Great Debauchery,” you look through a viewfinder pointed at an app in the painting, and this triggers its functioning. Virtual reality, on the other hand, puts the viewer in a totally immersive environment.

“You are in another world when you wear the headset and you control what you see by the way you move your head,” Salvante explained. “You become one of the players. It’s very theatrical.”

This would be fancy enough, but Solmi and Rowan went a step further.

“We came up with the idea of making masks to fit over the headsets,” Salvante said, “which provided another opportunity for us to collaborate with the computer engineering people.” 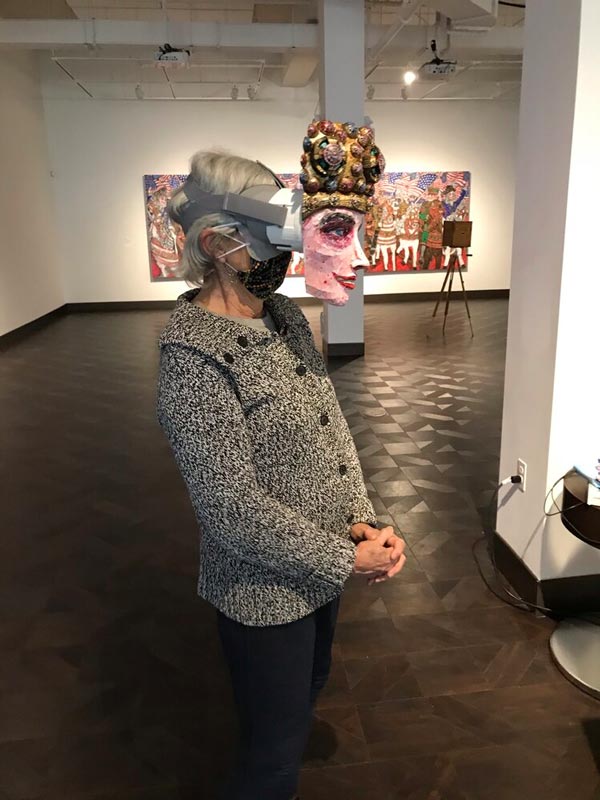 “They were printed white, then we sent them to Federico, and he painted them as the characters appear in the video, down to the smallest detail.”

The visual opulence of the works would grab your attention regardless, but Solmi’s topical subject matter is also compelling.

Characters that Salvante referred to as “their own little tribe,” selected from cultural, political, religious, historical, and mythical figures, reappear in Solmi’s works. They are depicted in a cartoonish, almost ghoulish, way, with exaggerated features – sinister-looking smiles and huge, bulging eyes, for example. And, with few exceptions, they are shown acting like fools.

Solmi’s website states that these portrayals are intended to be a vehicle for opening a dialogue with his audience about society’s shortcomings.

“One of the greatest difficulties I encountered when I moved to the United States in 1999,” Solmi said, “was to decipher American history, its contradictions, and inaccuracies that I often encountered in my research and reflections.” 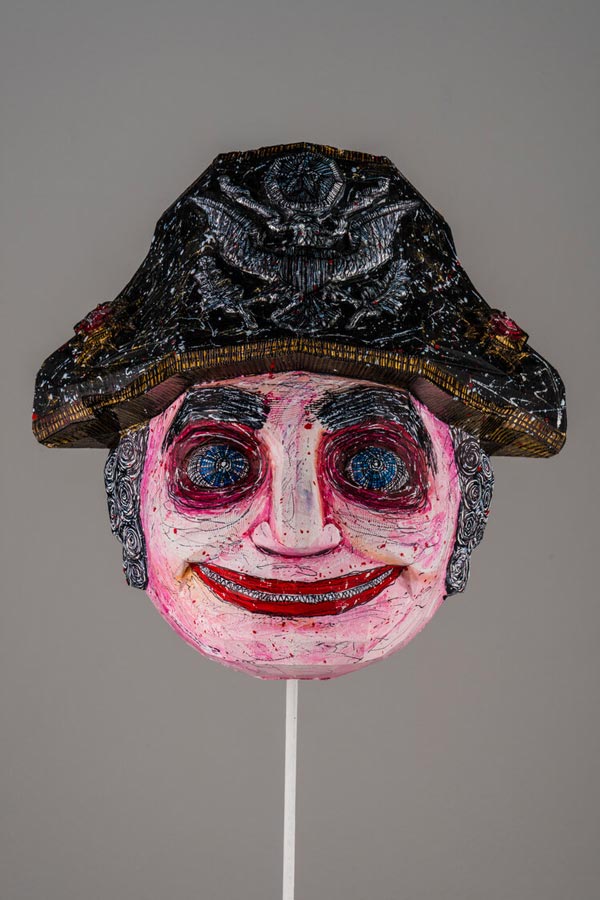 Salvante explains further: “One of his points is that there have been a lot of misinterpretation of historical events and the legacy of some historical figures.”

Many of the themes in this exhibition are political in nature and Solmi uses images of famous – and infamous – people as a metaphor, urging people to be vigilant and not take things at face value.

“We need to question everything, to continue to do that,” Salvante said, “This is the artist’s message.”

“And, as a university, and a university gallery, this is what we are trying to instill in the students.”

”Federico Solmi: The Bacchanalian Ones” in on view through January 9, 2021. The Rowan University Art Gallery, located at 301 High St in Glassboro, is free and open to the public. Advance reservations are required and can be made, for one-hour visits, maximum five people at a time, through Eventbrite.

originally published: 12/24/2020
About the author: Shen’s been a Jersey girl for most of her life, other than living for a three-year stretch in Portland, Oregon, and six magical months in Tokyo. Shen loves the arts in all of its various forms – from the beauty of a perfectly-placed base hit to the raw energy of rock 'n' roll – and has successfully passed on this appreciation to her three grown children. Shen’s most recent jobs include WXPN (1993-2001) and the Philadelphia Museum of Art (2003-present). Shen also has been a working freelancer for 25 years, and operated her own frame shop in Mt. Holly in the late-70s.
Content provided by Discover Jersey Arts, a project of the ArtPride New Jersey Foundation and New Jersey State Council on the Arts.