Makin Waves Song of the Week: “Invisible” by Ian Bamberger 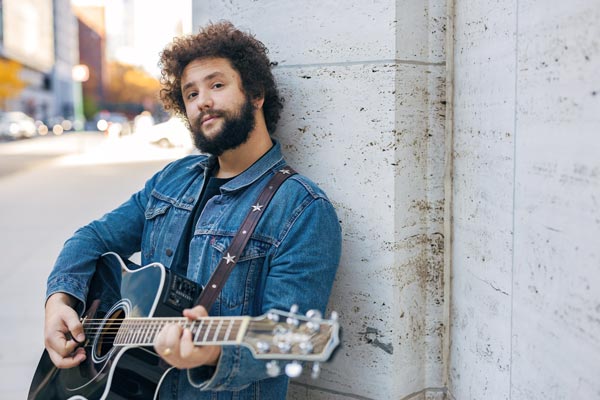 Brooklyn-based, Jersey-raised singer-songwriter-guitarist Ian Bamberger has released a new single, “Invisible,” which was written during and inspired by the pandemic. PHOTO BY ARIN SANG-ARAI

Making music since he was 12, Brooklyn-based, Jersey-raised singer-songwriter-guitarist Ian Bamberger reignites his rising star with his latest single, the acoustic rock ballad “Invisible,” which can be enjoyed here as the Makin Waves Song of the Week:

As the Makin Waves Song of the Week, “Invisible” also can be heard at 5 and 11 a.m., 5 p.m. and midnight through Thursday at ThePenguinRocks.com and 6:45 p.m. on Friday and Monday on its Radio Jersey show.

“The song tells the story of coming to love yourself and allowing yourself to be fully ‘seen’ by strangers and the people you love,” Ian explained. “‘Invisible’ musically builds throughout the song and eventually crescendos into a giant chorus with vocal harmonies. There are some great guitar licks sprinkled throughout the track, and each verse acts as a new chapter within the song. The goal was to write a song that grows lyrically and sonically until the end when there are several guitars and vocal harmonies booming in unison.

“As a rock musician at my core, ‘Invisible’ enabled me to step back from the electric guitar and truly embrace a more ethereal acoustic sound,” Ian continued. “This release marks a new chapter in my life as a songwriter and musician. This track was one of the first tunes I wrote during the beginning of the pandemic. I was fortunate enough to have the track recorded, produced, mixed and mastered by the talented Charlie O’Connor, a fellow musician whom I met while studying at New York University’s Music Business Master’s program. Charlie helped put all of the melodic ideas I had in my head into the recording, and he helped shape the musical journey of the recording from start to finish.”

Ian said he will release a music video for “Invisible” on Dec. 21. Then he will continue to record and release songs written during “these uncertain yet inspirational times,” he said.

The next release early next year will be a tune entitled “Crazy World.” In the meantime, here’s a look at the videos Ian has released: