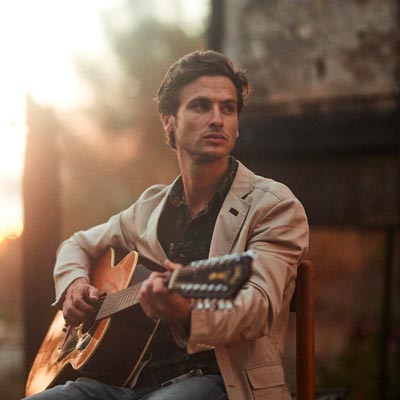 Israel Portnoy is an artist from Hale, Cheshire, UK, who currently resides in the land of his namesake, Israel. He shared a video for his beautiful song "Peace of Prayer / Shalom" with us.  The video was filmed and recorded in New Jersey with gospel singers from the Garden State.

"As a Jew from the UK, currently living in Israel,  I deeply believe in musicians doing interfaith work to truly cross bridges and unite worlds," said Israel Portnoy. "I therefore embarked on a concept album universal praysongs inspired by ancient jewish prayers and I flew from Israel to NYC and recorded first song 'Peace of Prayer/Shalom' with a gospel singers from New Jersey and at guitarist Hanan Rubinstein's Fort Lee 'Daxxit Sound Studios' (he plays with Alicia Keyes and some other big names).

"I wrote this song almost half my life ago. It was initially inspired by the ancient prayer chant (from the Chabad custom) of 'Birkhat Kohanim', the Priestly (Aaronic) Blessing," continued Portnoy. "I never put it out there as I never felt fully able to stand behind it so I told myself all kinds of excuses like 'the world doesn't my take on jewish music' and 'I'll make music which is more universal instead'."

"Today, on the day where there would usually be tens of thousands of people from all over the globe flocking to the western wall In Jerusalem for the annual global blessing/ceremony, this actually feels more universal than anything I've ever done in my life. I am ready. I hope it's not presumptuous to say that I deeply feel that the world is more ready for it than we have ever been." he added.

This is the first track from his upcoming album called Poetry of Prayer.  He told us that he thinks songs of peace are very needed right now.  We agree.

Portnoy is an artist, singer-songwriter, multi-instrumentalist, producer, and “once-a-year-Cantor” hailing from Hale, Cheshire, UK, and currently residing in the land of his namesake, Israel. His first solo project, a concept album named Facing Flames feat. Guilda launched  May 23, 2020, with its title-track, (lead-single) alongside an inspiring music video. The date commemorates the one year anniversary of a forest fire that destroyed everything he owned and burned through Mevo Modiin, a village in central Israel where Portnoy lived at the time. His entire musical instrument collection and countless books of lyrics, journals and poetry, and recorded music were obliterated within hours and without prior warning. The only thing he was left with was “Guilda” - his vintage ‘63 12-string guitar, which he had taken with him as he left his house earlier that day. Having lost so much, “Guilda” eventually became his well-needed pivot to reconnect him back with the world and inspire him to write once again.

"One of the first feelings I deeply resonated with after the shock of losing our home (in what started out as a forest-fire), was the idea that I was able to find a deep sense of comfort in connecting to a greater universal sense of loss - a human blues if you will," wrote Portnoy on his website. "This, in turn, connected me to something beyond myself and my limited personal experience. It's not that a sense of empathy with others invalidates your own suffering, or even diminishes it. Instead, it brings you back to a place of consciousness that reinforces that what you are going through is a part of the greater human experience. You are never alone in your suffering and that we are indeed 'just human too'. With that in mind, It felt right that 'Backporch Blues' would be the first single I'd release from this concept-album Facing Flames (feat Guilda). I went back to the house with Basti Hansen to get an album-cover shot and some footage of what remained. When we were done, we had 10 mins left, and he literally fought against the sunset as I sat in the spot where my wooden back porch where I would sit and write songs."