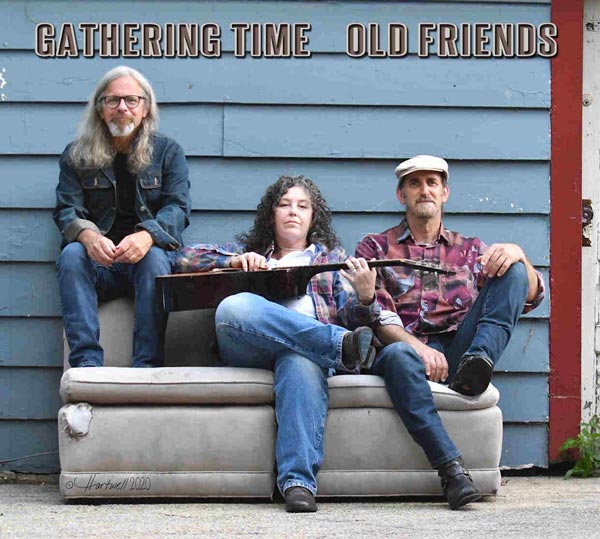 "Most of these songs are like old friends to us; we grew up with them and they stuck with us both musically and lyrically. A song like "At Seventeen" by Janis Ian is one that we covered and it helped all three of us get through our teenaged years and it still resounds with people today. So, we've gotten to be old friends and these songs certainly are like that also."

Gathering Time are a Long Island, NY folk trio with four previous albums under their collective belts and they have been quietly making in-roads in the folk music genre for more than a decade. These three muses have recently delved back into their and many others pasts with a new album of cover material; a departure from their norm.

"The album is called "Old Friends" and we released an advance single from it in July because the album is entirely sort of iconic 1960's and 70's folk rock songs; or at least songs by iconic groups and songwriters,"says Stuart Markus one of the founders of the group.

"We've done four albums of mostly originals with one or two covers or songs by our friends. We do a fair number of tributes shows, parks concerts, library shows for example where we have specialty shows all built around 1960's and 70's folk rock which is really the music that has influenced us the most; we kept on having people coming up to us and asking if we had an album of us just doing that. So, after four albums of originals we decided to put one together and as time went on and we started working on it and times being what they are, we decided to include a number of the particularly socially and politically conscience songs of the era as well and that's gotten a lot of attention over the last four months."

Gathering Time? An interesting and somewhat open ended moniker for a folk trio; so, how did it come about?

"All three of us live here on Long Island and we are called Gathering Time,"continued Markus, "We were at a folk conference called N.E.R.F.A the North East Regional Folk Alliance and we had been trying to come up with a name for months and we could never come up with one that we all agreed on. So, we were at this conference and got a whole lot of attention there from folk deejays who came up to us and said, "When you get something recorded, we want to play it" and several concert presenters who said, "When you guys decide on a name let us know, we want to book you" so we had to finally decide on one. The thing about these N.E.R.F.A conferences is that there is music happening all over the place and whenever we started singing and harmonizing people would just gather around and we noticed that this was thje case whether it was there or singing on the streets for fun or at a local pub. So, we said, ok let's do something with gathering; we had a couple of variations of that; gathering strength, hmm maybe not; gathering dust definitely didn't work. I suggested Gathering Time and everyone kind of looked quizzically and said, "Yeah, that's kind of cool" and then we realized that it could go two ways; time for gathering like people getting together or harvest time or it could be "If I could save time in a bottle" like if you could collect time and save it up. So, we all kind of went with that."

"Old Friends"is a collection of classic material that dotted their set lists pretty much all of their lives, so when the decision was made to record them it should have been a fairly easy task; or was it?

"Our first album came out in '08, so we do one about every three years or so but this one took a lot longer to produce than we expected it to but it came out pretty well. We thought this would be quick and easy to knock out because we've been playing these songs so long but as we got into the recording process we kind of expanded our sights and said, these songs could use some drum parts so we had to go to a studio and find a drummer to work on those, we decided to add other guitar parts; we are three people, two of us play guitar and bass, one of us plays mostly percussion and all three of us sing. So, we decided to produce the best sounding album that we could rather than just reproducing what we do live so that kept on adding time. Then there were other things that happened; the studio's computer hard drive had a melt down and the engineer decided that it was time to build himself a new one and that caused a few months of delays. One of our people's day jobs got really onerous and he had to take some time off because he was working 12-hour days and he was too wiped; so, delays kept on happening. It kind of felt like something was holding us back until this particular time and we thought, OK now is the time to release the album."

"It's more folk rock than pure folk. There is one Peter, Paul and Mary song on there but the album opens with "Turn! Turn! Turn!" by The Byrds which is really the first folk rock band; it was a song written by Pete Seeger so there's the folk connection. We've got "Get Together" by The Youngbloods, a couple of songs by Simon & Garfunkle, one by Joni Mitchell, one by Gordon Lightfoot; it sort of runs the gamut. We have one that was written for Blood, Sweat & Tears, one by the Grateful Dead, ("Ripple") who had a folky side that people sometimes forget about; it's all these acts that kind of had a foot both in rock and folk to some degree so..."

Over the years, they have been a model of consistency with very few tweaks; well OK, there was one variation.

"There was one change; one guy who did our first two albums and was with us for our first six years or so. He decided to step back because we were starting to tour more and more and I don't think he liked being away from his wife; he never quite gave us the reason but he decided to quit the band in the Fall of 2012 but he stayed with us through all of the gigs that we had booked at the time and his last gig with us was in March of 2013. We brought in Gerry McKeveney to replace him and Gerry and I actually knew each other from a songwriter's workshop group from back in the 1990's. I didn't realize the skillset that he had was exactly what we were looking for; a few friends had suggested him, I gave him a call and we had a nice conversation and he turned out to be the first and the last person we auditioned and he's been with us for seven and a half or eight years now and then there's Hilary Foxsong who has been with us from the beginning."

With the album released and the world in flux; what is next going forward? Markus says that here too they have a plan.

"Well," he said with a laugh,"Right now; promoting the album. It just seems like a timely time to release it with everything that is going on and maybe some of these iconic songs have found new  found relevance to the times. So, we're trying to ride out the publicity that we're getting on this; we actually promoted it to folk radio and it came up the number one album on the folk DJ chart for September. We've done some streaming shows, we did some outdoor shows over the summer that were deemed safe enough with people and us well-spaced enough. We'll do some shows from Gerry's living room which is fairly large and just do the best we can to ride out the storm and once it's safe enough to stick our heads out hopefully we'll be out and touring again. It has been tough on musicians. The three of us can get together but we don't want to do it where the audience can't gather safely; we did a couple of drive in concerts here on Long Island over the summer and one parks concert where they actually put chalk circles in the grass telling people where to sit so that they can stay safely spaced; it's certainly was better than not playing at all."

Markus says the album is available,"Via downloads or physical cd"and that the best way to puchase it and/or to find out more about them is to visitwww.Gathering-time.com .