Makin Waves Song of the Week: "Carpe Diem" by The Foes of Fern 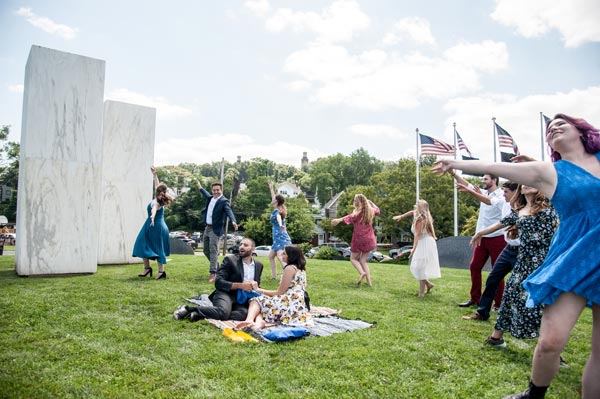 Asbury Park-based The Foes of Fern premiere in Makin Waves the video for the title track of their “Carpe Diem” debut LP on Telegraph Hill Records. It is the LP’s sixth clip and the third in a storytelling series lensed by Andrea Morgan, Bart Lentini and Rob Ciano and starring Ava Serene Portman and namesake band leader Matt “Fern” Fernicola. PHOTO BY MICHELLE KONDRECK

Asbury Park-based Telegraph Hill recording act The Foes of Fern have done a helluva job promoting their debut album, “Carpe Diem,” with several videos, the sixth of which for the title track premieres here as the Makin Waves Song of the Week:

“Carpe Diem is the oldest Foes song on the record,” said singer-songwriter-guitarist Matt “Fern” Fernicola, a veteran of such popular Jersey Shore bands as Airacuda and The Burns before fronting his own. “I wrote it back in 2011 for my Songwriting 101 class at Berklee (College of Music), and I got a solid B+ on it. I based the music and lyrics off of ‘Till There Was You’ and wrote the song for my new girlfriend at the time. The song is about getting the most out of our potential life together. We both always wanted to travel and learn how to speak a bunch of European languages so I included those places in the chorus of the song.

“All and all, ‘Carpe Diem’ is the peak of romanticism for me,”

Fern continued. “I went out to build the music as romantic as possible, which is why we added accordion, mandolin, violin, clarinet and all the other instruments to the song. I wanted the song to feel like one big fantasy, and I think we hit that goal.”

Like the award-winning “Bike Song,” the clip for “Carpe Diem” was lensed by Asbury auteur Andrea Morgan.

After a very positive reaction to the “Bike Song” vid, Fern said he wanted to keep a timeline going between both clips, as well as the previous video for “Ghost (Girl in All My Songs,” which was directed by Bart Lentini and Rob Ciano. Local actress Ava Serene Portman stars with Fern in all three.

“As I said before, I set out to make the music for ‘Carpe Diem’ be the peak of romanticism,” Fern continued. “This created a fantasy effect to the music, and we decided to turn the video into that fantasy world. The world of ‘Carpe Diem’ is that totally unbelievable Disney movie that would just never exist in real life. The video starts off with the end of the main characters' relationship, and then it spirals into the fantasy world of what Disney and other movies try to sell us on. The reality is there is no utopian perfect world out there, and toward the middle of the video, the fantasy world of ‘Carpe Diem’ begins to deteriorate. We see the film crew, and our director starts fighting with the cast. We see the main character start to question the reality of the world, and by the end of the video, it's clear that this huge beautiful world is really just some imagination.”

Fern thanked the four sponsors of the video:

As for the album, which was co-produced by Joe “Pom” Pomarico, Fern’s label head, Airacuda bandmate, and Holmdel High School chum, “Carpe Diem” is doing great based largely on the six videos made for it, Fern said.

“I've received a ton of kind words about the music from friends, family, and even some strangers,” he said. “I'm incredibly proud of the final product and also incredibly proud of all the music videos that we have released. I set out to create the best content that I possibly could create and at the end of the day, I feel like myself and the rest of the Foes / Telegraph team have been successful in that goal.”

Fern & Pom also recently collaborated with the Bruce Springsteen fan club Spring Nuts on a Zoom recording of “Land of Hopes and Dreams” in birthday nod to the Boss, who turned 71 on Wednesday. In benefit to Asbury Park Music Foundation, 100 participants doubled the number of musicians who contributed to the “Carpe Diem” album.

The Foes of Fern will play a couple shows in the next few weeks. Sept. 26 marks the return of Porchfest to Asbury Park, and Fern will participate. More details are at apporchfest.org/map-and-schedule/. Oct. 3 will feature a full band outdoor AP house show, the address of which will be released DOS on social media. On Oct. 12, The Foes of Fern will do a livestream from House of Independents, also in Asbury, while Oct. 17 finds the band participating in a camping festival along the scenic Delaware River in Frenchtown.

In the meantime, Pom & Fern are planning Telegraph’s annual year-end show and compilation.