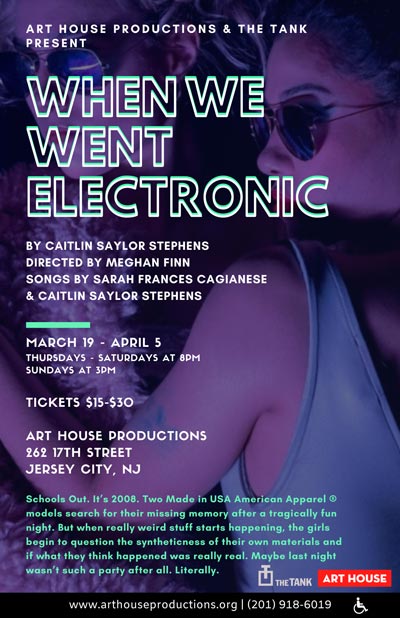 (JERSEY CITY, NJ) -- Art House Productions will present the New Jersey Premiere of When We Went Electronic by Caitlin Saylor Stephens, with songs by Sarah Frances Cagianese and Caitlin Saylor Stephens at Art House Productions, March 19-April 5.  Directed by Meghan Finn, the production was hailed as “absurdist edginess” and “taut and brutal” by The New York Times while at The Tank in 2018. Art House’s production will feature actors Tiffany Iris and Madelyn Rose Robinson.

Schools Out. It’s 2008. Two Made in USA American Apparel ® models search for their missing memory after a tragically fun night. But when really weird stuff starts happening, the girls begin to question the syntheticness of their own materials and if what they think happened was really real. Maybe last night wasn’t such a party after all. Literally.

"It is a fine example of how experimental plays in the 21st century can explore modern culture and important issues... I highly recommend it to anyone who enjoys theatre that is equal parts entertaining and thought-provoking" - Anthony J. Piccone, Onstage Blog

Caitlin Saylor Stephens (Playwright) is a Brooklyn-based playwright, performer, and filmmaker. Her work has been presented at The Tank, The Flea, NYTW, The Lark, New Georges, The Amoralists, and elsewhere. Among her awards are fellowships, scholarships, grants, and residencies from SFAI, Headlands Center for the Arts, Ucross, VCCA, New Georges, The Whiting Foundation, and The Jerome Foundation. She’s received two honorable mentions on The Kilroy’s List and has been a finalist for New Dramatists, The NYFA Made in NY Women’s Grant, Princess Grace Award, Sundance Theatre Lab, 2019 & 2020 Creative Capital Award, BAPF, P73 Fellowship, multiple Jerome Fellowships, Berkeley Rep Ground Floor, and the Boris/Segal Fellowship at WTF. Caitlin is currently under commission with Lincoln Center Theater where she is an artist in residence.

Meghan Finn (Director) is the Artistic Director of The Tank. Her work has been seen at the Tank, the V&A, Serpentine Galleries, The Wexner Center, SCAD, The Logan Center for the Arts, Museo Jumex Mexico City, The Power Plant, Canadian Stage, Carnegie Mellon, Brooklyn College, MIT, the Great Plains Theater Conference and others. She has directed three world premieres by playwright Mac Wellman, including most recently The Invention of Tragedy at The Flea. Ms. Finn is currently directing the world premiere of I am Nobody a new musical by Greg Kotis at The Tank; as well as The Nine Dreams: Blake & the Apocalypse by writer Nick Flynn as an immersive performance installation at The Silos at Sawyer Yards for CounterCurrent Festival, Houston. She is a frequent collaborator of conceptual artist and sculptor Pedro Reyes, and directed DOOMOCRACY for Creative Time. She has collaborated with photographer Mitch Epstein on a live performance with cellist Erik Friedlander as well as premieres by Erin Courtney, Peggy Stafford, Gary Winter, Ben Gassman, Alexandra Collier, Carl Holder, Eliza Bent and Cori Copp.

Sarah Frances Cagianese (Composer) is a Manhattan based composer and songstress. One half of the electro-pop sister duo Frances Rose, Ms. Cagianese has been making heart-pumping beats and soul enticing melodies all over New York, France and West Africa. She has been a featured artist in VICE, NOISEY, Sound Venue, BULLETT, NYLON and most recently Front Runner Mag. In 2008, Sarah received a grant from Berklee College of Music which helped her create Case Collective, an organization which provided education, clothing and two meals a day to impoverished children in Niger. In 2011, Ms. Cagianese was signed to Warner/Chappell through Neon Gold Records for publishing. She remains an active ASCAP Member, So Far Sounds Alumni, and international Soho House Member. She’s worked with Leonard Cohen Memorial Concert, The International Woman's Day Concert, African Studies Center at BU, Children of Bellevue Hospital, She Runs It.Org, Amnesty International, Make A Wish Foundation, and Toys For Tots in addition to being an active UNICEF member. Her band Frances Rose was awarded "Best Emerging Artist" by Deli Magazine. You can find her hit single “Vampire” on Kitsune America’s compilation which PAPER Magazine describes as “haunting pop.” BA, Boston University. Follow Sarah on social @sarah.frances.rose and her band @francesrosemusic

Patrons are invited to Art House’s When We Went Electronic opening night party on Friday, March 20 at 8:00pm. Tickets include a post-show champagne toast with the artists. Tickets for this special event are $30, and may be purchased by calling (201) 918-6019 or online at www.arthouseproductions.org.

Patrons are invited to Art House’s When We Went Electronic Access Performance on Sunday, March 29 at 3:00pm. The performance will include large-print programs, audio-description, ASL interpretation, and a pre-show tour of the set. Art House is a fully accessible venue. ADA Tickets for this performance are $20, and may be purchased by calling (201) 918-6019 or online at www.arthouseproductions.org.

When We Went Electronic runs March 19- April 5 at Art House Productions, 262 17th Street, Jersey City, NJ. Tickets are $30 standard, $20 for senior citizens/ADA, and $18 for students. Tickets for the preview performance on 3/19 are $15. To purchase tickets, please call the box office at (201) 918-6019 or visit Art House online at www.arthouseproductions.org. The performance will run approximately 75 minutes, with no intermission. The Art House Gallery is open before and after the show; you can bring your drink in the theater! Proceeds directly support Art House’s artists and mission.

Art House Productions is committed to accessibility and inclusivity in all the public programming presented by our organization at our performance venue. While ticketing for events is general admission, we are happy to reserve seats for patrons with limited mobility, impaired hearing, vision loss, and/or any other medical condition(s) that may necessitate specific seating requests. Art House Productions is a fully accessible space, and companion seating is available for patrons with disabilities. Assistive listening devices, large print programs, publications in alternate formats, sign-interpreted, audio-described and open-captioned performances are available upon request; please call (201) 918-6019 or email info@arthouseproductions.org at least two weeks prior to your desired performance.

Art House Productions produces work with a shrewd sense of social responsibility and challenges the idea of "universal" mind and "universal" body in each artistic endeavor.

Founded in 2003, The Tank is a multi-disciplinary non-profit arts presenter and producer, which provides a home to emerging artists working across all disciplines, including theater, comedy, dance, film, music, puppetry, and storytelling. Led by Artistic Director, Meghan Finn and Managing Producer Danielle Monica Long King, The Tank champions emerging artists engaged in the pursuit of new ideas and forms of expression. In doing so the company removes the economic barriers from the creation of new work for artists launching their careers and experimenting within their art form. From the company’s home with two theaters on 36th Street, The Tank serves over 2,500 artists every year, presents over 1,000 performances, and welcomes 36,000 audience members annually. The company fully produces a curated season of 13-18 theatrical World or New York premieres each season.