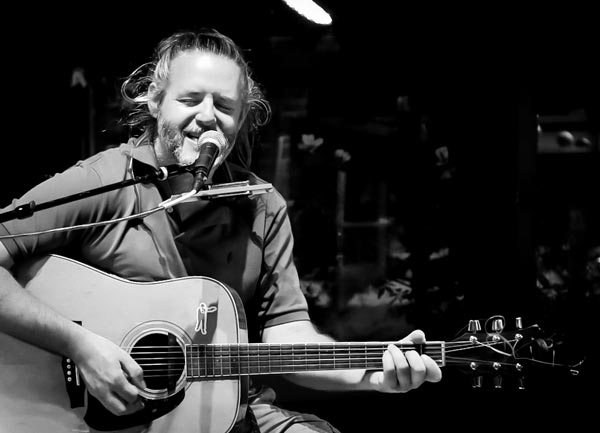 (WEST LONG BRANCH, NJ ) -- The Center for the Arts at Monmouth University presents Songs & Stories Featuring James Dalton & Friends on March 29th at 8:00pm.  It is a night of singer-songwriters, curated and hosted by veteran Shore area musician James Dalton.

Presented as part of the 2018-2019 Performing Arts Series, the “songwriters in the round” style concert represents a Monmouth debut for Dalton, the self-proclaimed “storyteller guy, song man, front man, radio personality, poet, and actor” whose presence on the Garden State’s soundscape extends from his co-founding of the enduring jam band Secret Sound, to countless appearances in solo, duo and small combo settings at popular area nightspots. Hosted inside the Pollak Theatre, the event furthers a core component of the Center for the Arts mission: to celebrate the diverse sounds that issue forth from our own big back yard.

The program also serves as a homecoming of sorts, for the vocalist-guitarist-harpist who penned and performed the exuberant anthem “Come Back to the Jersey Shore.”  It’s a renewed commitment for the artist who has described himself as “of the scene, but not part of it” — a troubador whose globetrotting escapades could just as easily have found him jamming in a Shanghai jazz club until 3 a.m., or entertaining on a series of Baltic Sea cruises, as keeping the home fires burning in the saloons of New Brunswick or Asbury Park.

Having taken on the additional role of single dad to a three-year old son, the Ocean County native now keeps his professional travels beyond New Jersey to the neighboring states of Pennsylvania, New York, and Connecticut — but while he doesn’t play to audiences in Florida or Vermont like he did in seasons past, the multi-tasking music man has instead expanded the reach and range of his creative energies, via the recent release of a spoken word album project, and his ongoing stint as host of a weekly radio program on listener-supported 90.5 The Night.

Along the way, James Dalton has had the pleasure and privilege of working and sharing stages with partners that have ranged from beyond-legendary session drummer Bernard Purdie, to next-generation talents James McMurtry and Derek Trucks, to such Jersey-pride performers as Nicole Atkins, Vini Lopez, and Bon Jovi’s David Bryan. For his debut event on the Monmouth campus, the author of several collections of poetry — and creator of the autobiographical “Shanghai to Memphis,” a solo theatrical piece that he brought to the world-famous Edinburgh Fringe Festival — presides over an affair about which he says, “I’m not the star of the show in the least.”

Joining the host for “a more collaborative cross between a concert, a pub jam, and a TV commercial for the show ‘Once’” is a collection of “very interesting people” that includes Linda Ronstadt’s musically gifted nephew Michael Ronstadt, Dublin-bred singer-songwriter Steve Reilly, as well as fellow Shore favorites Steve Delopolous, Tara Dente, and Karlee Bloom. Adding more colors to the sonic palette are Point Pleasant Beach’s April Centrone (an educator and expert in Middle Eastern music with a specialty in the stringed instrument known as the oud), and Andy Keenan (on banjo and pedal steel).

“These are people that I’m either a fan of, or I’ve toured with in the past,” says Dalton. “There are no musical strangers to me.”

Star turn or not, at the heart of this Songs and Stories solar system is Dalton, a constantly searching artist whose command of his own skills shines brightly, whether flying strictly solo or fronting the band Sleepy James and the Up All Nights. On highly personal, localized songs like “Jersey Shore,” “Grafton Street” and “The House My Grandfather Built” — or on universally resonant material like “Sugar Mama” and “Everyman’s Blues” — the musician blasts away the stereotype of the mellow creature with the acoustic guitar; playing with the full intensity of a multi-piece combo, and lending his incredible vocal range to “hillbilly werewolf” whoops, cool-cat scats, and illuminating choral fills that do the job of three or more backup singers.

For more on the show and James Dalton, click here for our feature in NJ Stage Magazine Issue 56.

Tickets for the March 29 concert event featuring James Dalton and Friends are priced at $25 and $35, and can be reserved through the Monmouth University Box Office at 732-263-6889, or online at www.monmouth.edu/MCA.  The Pollak Theatre is located at 400 Cedar Avenue in West Long Branch, New Jersey.